Home>Blog>Research>How Much More Can You Make With Top Rated Mutual Funds?
SHARE

How Much More Can You Make With Top Rated Mutual Funds?

This article is a product of a small case study that deals with the analysis of the returns of the 3 major mutual funds categories small-cap, mid-cap, and large-cap mutual funds. Before we dive into the details of the case study we shall first describe what these different mutual funs are.

So What Is Small, Large and Mid-Cap Mutual funds?

SEBI has decided a total of 11 categories under equity schemes, but a mutual fund company can only have 10 categories and it has to choose between value or contra. Yet, 10 categories look a bit high but  it’s fair considering the possible variations in the strategies. To make this easier, SEBI has also defined the meaning of Large Cap, Mid Cap and Small Cap.

Coming back to our analysis, we try to imply on the fact that in each mutual fund category the higher returns are generally associated with mutual funds of higher quality and rating.

Here we have selected 2 mutual funds in each category of small, mid, large-cap one with a higher rating than the other. Byanalyzing the returns for 4, 5, and 6 years respectively we try and prove that the returns are greater with a  higher rated mutual fund of a better quality.

What Is a Mutual Fund Rating?

A mutual fund rating is usually a measure of a fund’s historical risk-adjusted performance, over different time frames.  It is thus a composite measure of both return and risk, which gives an idea about its ability to deliver returns for a given level of risk.

The ratings are based on different time periods—trailing 3 years, 5 years or 10 years—combined to give a single measure of risk-adjusted performance. After the ratings are calculated, stars are assigned on the basis of the percentile in which the mutual fund is positioned. For instance, the top 10% funds are assigned a 5-star rating, while the bottom 10% funds are slapped with a 1-star rating.

In our case study we have chosen :

Let us consider an SIP amount of 2000 rupees per month. The starting date of which is 2nd January 2014 and the ending date is 2nd December 2017(i.e a period of 4 years ).
The variation of the NAV(net asset value) is shown below.

With a total investment of 96,000 rupees over the course of 4 years,Indiabulls blue-chip mutual fund produces a final amount of 1,26,650 rupees, hence it produces an average 4-year return value of 31.90%

Small-cap funds are generally risky, but over a long period of time with a systematic investment via SIP’s, small-cap funds may produce a higher rate of interest when compared to mid-cap or large-cap mutual funds.
Shown below is the variation in NAV(net asset value) of Reliance Small-Cap Fund vs Sundaram Small-Cap Fund. 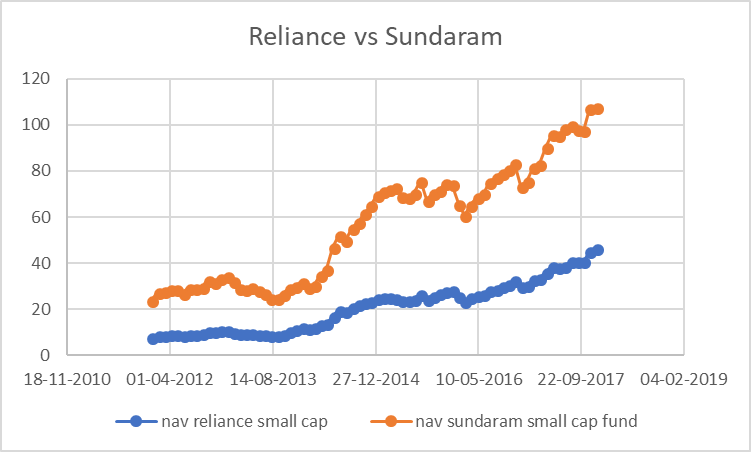 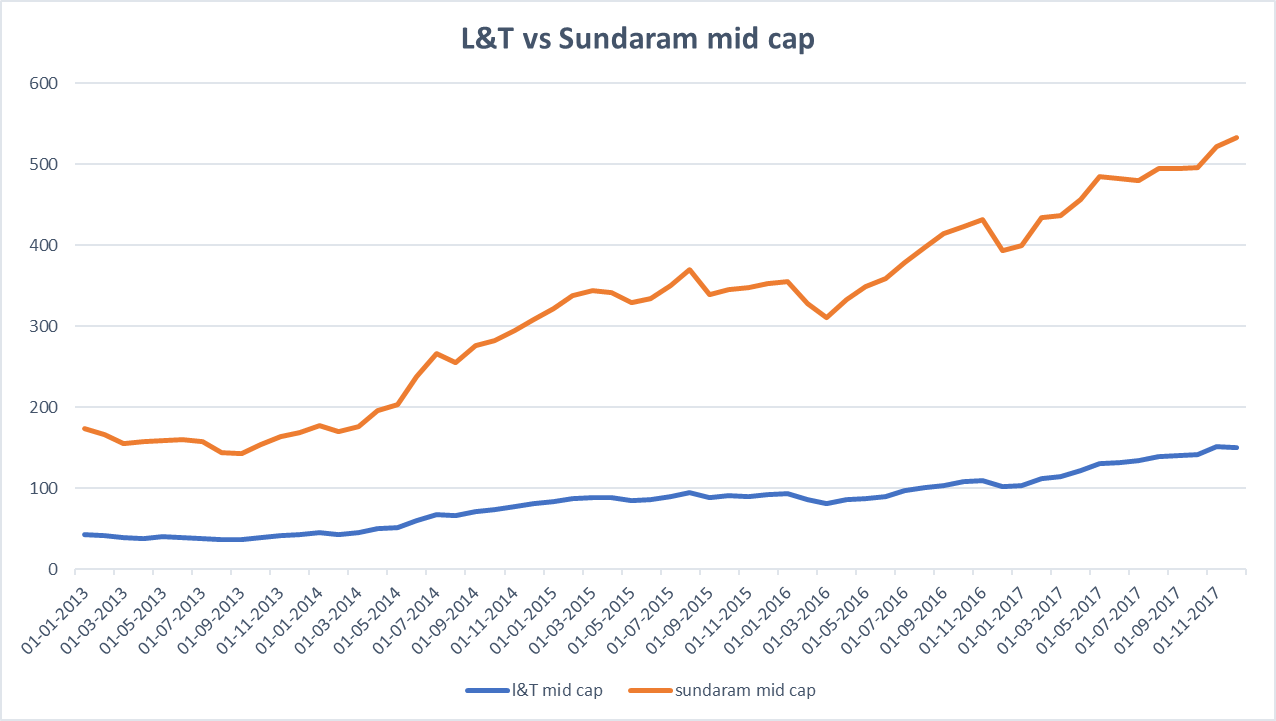 This analysis goes to prove that the better the quality and the rating of the mutual funds, the better returns it will provide over a period of time be it small-cap, mid-cap or large-cap.