You must have heard about the World War.

But, have you heard about the trade war?

Yes, something like this does exist and it’s ensuing in the economy right now.

We have been hearing about the trade war going on between China and the USA from a very long time, but we don’t know why it is such a critical issue and how it’s going to impact India.

In this article, we are going to discuss what exactly trade war is, how it started and its impact on the global and Indian economy.

Trade wars have been a part of the economy since ages.

It is a conflict which results from extreme protectionism measures taken by countries. Countries raise taxes and tariffs on imports and reduce the demand the goods, leading to a slowdown in the exporting country’s economy, leading to political tension among the participating countries.

And presently, USA-China is entangled in a trade war.

It started in January 2018 when the USA imposed a tariff on the goods majorly imported from China such as solar panels and residential washers.

China immediately responded by imposing a similar tax on the goods imported from the US.

In mid-August, the US imposed a duty of another $16 billion imports from China, followed by another tariff of $200 billion goods in September.

Now the question which arises;

What is the reason behind this trade war?

The answer lies in the trade deficit the USA has with China.

Trump administration reported that the USA has a trade deficit of $500 billion with China with theft of Intellectual Properties costing around $300 billion which China purported.

Trump claimed that in this era of liberalization and globalization, the other countries have benefited on the cost of USA losing.

The Trump administration rationalized that the USA had sacrificed a lot for other countries till now and to protect its interest and prosperity, the USA is increasing its tariff. 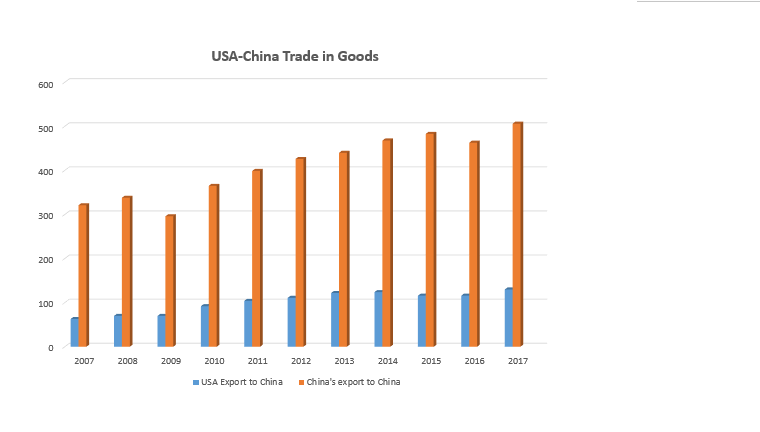 Impact this trade war has on India.

The day the Trump administration announced the tariff rise, the stock market around the globe went into shock and started plummeting.

India also felt the impact, but it was not too much.

Experts said that India would not get affected negatively by this. On the contrary, it will open a plethora of opportunities for India. But, it is not precisely correct. India has seen a mix of both, negative and positive impacts.

Positive impacts of the trade war

The trade war will help in making India self-dependent.

We are paying a much higher cost for imports. It shows the need to develop Indian firms to fight external factors. The trade war has created a gap in the US as well as the Chinese market.

India can fill that void.

Initially, India was not able to export many items to the USA due to cost disadvantage, but after the tariff hike, India has the edge.

There are many other products such as electrical parts and switches where India has been competitive but has been lacking on the production side.

This is an opportunity to expand the production to meet the global requirement which will further boost India’s infrastructure and job rate.

There are multiple US exports such as flue-cured tobacco, fresh grape chemicals, etc. to China which align with India’s export.

The substantial demand along with the differential cost allows India to gain a significant share in the Chinese market. Along with this, India has 6-35% concession on duty under Asia Pacific Agreement making Indian exports more desirable.

Negative impacts of the trade war

Many experts say that the tariff war is going to impact only small export-focused countries which stand to lose in this tariff war.

Mr. Anand Mahindra, chairman Mahindra group tweeted, India is a free economy, and we can stand tall in this tariff war. He pointed out that India is a fast-paced, growing economy and multinational companies would want to be part of this growth, ignoring the trade war.

It would have been great if this statement would come true without India losing anything.

But, to maintain the competition in such hard times, India must pay by massive cost cuttings to attract global companies. Indian local producer is not equipped enough to fulfill the domestic demand.

The trade war led to the weakening of rupee as investors became critical of the Indian market. It also impacted the equity market severely. Apart from this, imports are growing more expensive due to the weakening of the rupee. All these factors make it hard for India to sustain competitiveness by reducing cost.

Apart from this, India has also been a direct victim of the trade war.

The USA blamed India for discriminatory trade practices. The export of steel from India has fallen due to the sanctions applied.

The US is also trying to review India’s eligibility of the generalized system of preferences which lets India export $5.6 billion worth export without paying any duty. If we can see, the trade war has not been a total win-win situation for India.

But it has given us an opportunity to seize the growing market. Though we lack in many areas, this is the opportune time to join the fight while working on the development required.