Does the Budget Indicate that India Can Become a 10 Trillion Economy?

In his speech introducing the interim budget, Finance Minister Piyush Goyal exuded confidence as he put forth his plan for the holistic development of the country.

The interim budget is generally not when political parties make big ticket promises but Piyush Goyal’s offering the nation was ambitious, akin to an election manifesto. In his address, the minister explained his vision for the country in the form of 10 points, or “dimensions” of development.

Although the economy is growing robustly, the 10 trillion mark is still a gargantuan task to accomplish given the myriad challenges that arise with India’s large population.

However, Minister Goyal’s budget gives up hope, because it seems to be aware of some crucial pain points in the Indian economy.

Let’s look at some of them

Agriculture, despite once being the backbone of the Indian economy and contributing over 14 percent to the GDP, has fallen behind as the years have gone by.

From contributing more than 60 percent to the GDP decades ago, it’s contribution to the GDP has reduced as other sectors, particularly the service sector has grown.

In recent years, India has seen many protests from its farmers over issues of debt. One of the main issues for farmers in India is the lack of capital to adequately take care of their crops and buy the latest equipment and supplies that will help them optimize output.

This is particularly an issue for small scale farmers, who often find themselves helpless in the face of crop failures brought about by unpredictable weather and declining soil.

In the interim budget of 2019, the finance minister has not missed the importance of supporting the farmers of India, particularly the small and medium scale farmers. 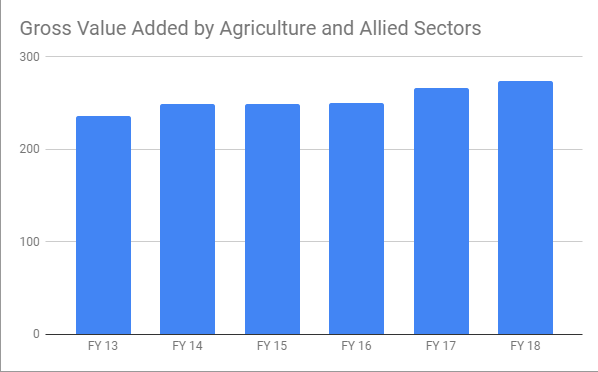 The Pradhan Mantri Kisan Samman Nidhi, with an annual outlay of about Rs 75,000 crore, is expected to offer amuch-needed relief to around 12 crore small-and-marginal farmer families.

Under the scheme, small and marginal farmers with less than two hectares of land will get cash in their accounts in three installments of Rs. 2,000 each every year.

This will provide some the needed support to farmers which they can spend on improving their crop.

Together, with the interest subvention benefits, it will also provide in enabling growth impulses to the rural sector. Another thing notable about the interim budget is its focus on alternate revenue generations streams like animal husbandry and fisheries, which is a step in the right direction because it gives impetus for rural citizens take up or focus more these streams, thereby reducing the pressure on agriculture.

Often, due to the high cost of practicing animal husbandry and fisheries, farmers put all their eggs in the farming basket, which is susceptible to unpredictable weather conditions.

With 67 percent of the Indian population living in rural areas, rural development is at the top of any budget list of things to focus on. The 2019 interim budget also gives emphasis on building a holistic rural ecosystem by providing renewed focus on village infrastructure, health and sanitation.

With press reports leading upto the budget, suggesting that the government become all set to increase rural spending, the government had silently confirmed their intent well in advance.

The budget saw the Narendra Modi government allocate more funds to key programmes that cater to India’s villages, with an increase of ₹5000 crore in overall allocation for the rural development ministry.

The center’s flagship rural job guarantee scheme (MGNREGS) got its highest ever budget allocation of ₹60,000 crore, an increase from last year’s budget by ₹5,000 crore but short of the 2018-19 revised estimates by 1084 crore.

However, the finance minister was quick to point out that additional support, if needed, would be provided. With the rural areas going through an agrarian crisis, this is a much-needed boost to the job guarantee scheme, which has ensured that 69.2 million people have already found jobs in this financial year alone.

In addition, a significant chunk of the pay off also went to infrastructure, with the government increasing funds for rural roads by atleast 22% over last year’s revised estimates.

The new allocation stands at ₹19000 crore as against ₹15500 crore in RE 2018-19. Allocation for road construction in the North East region has also gone up by ₹450 crore. The minister was keen to highlight this during his address. “We have worked to bridge the urban-rural divide in the country.

Members in this house, most of whom are from rural areas, will agree that several times in the past, only empty promises have been made to people living in our villages.

During the last five years, the government has undertaken targeted expenditure to improve their quality of life in all its dimensions.

Under the Pradhan Mantri Gram Sadak Yojana, 15.80 lakh habitations out of a total of 17.84 lakh habitations have already been connected with pucca roads and work is going on to complete the rest very soon,” said Goyal.

The budget is also very middle class friendly, with the minimum taxable income being raised to 5 lakh, a move that is expected to boost the savings of India’s burgeoning middle class.

Education, one of the most important human capital investments any government can make, saw a 17 percent bust in budget allocation.

The emphasis on human capital also extends to the government’s initiatives to take care of the elderly.

Old people in poor households are all set to get higher pensions as the government increased the budget of the national social assistance programme from ₹8900 crore to ₹9200 crore for the upcoming financial year.

The Ministry of Micro, Small and Medium Enterprises (MSME) also received a significant boost as part of the interim budget, with the budget encouraging the vision of women-led development by increasing support to women-led MSMEs.

For India’s growing population of women entrepreneurs, this will come as a huge boost.

The government also showed that it was keeping tabs on the state of modern technology, by announcing its vision to set up a National Centre for Artificial Intelligence.

If one were to sum up India’s challenges in scaling up its economy in a few keywords, they would be, education, agriculture and rural development.

With a huge percentage of the population being employed in the declining agricultural sector, heavy investment and modernization is necessary at the grassroot level.

In that sense, the government’s announced spending on agriculture is a good first step, if not a complete solution.

However, the significantly increased education budget and focus on middle-class development is certainly a sign that the government is accurately reading the core needs of a fast developing nation.

Does the budget indicate that India can become a 10 Trillion Economy? Certainly. But it will take steady, consistent and stable investment over a long period. In that sense, the interim budget indicates that India is on the right track.