Analysis: How does the future look for Hero MotoCorp?

With the way the petrol prices are skyrocketing, there are high chances for many of us to postpone a bike purchase!

If buying a bike isn’t happening soon, what about the stock of Hero MotoCorp?

Before you make any investment decision on this stock, it is better for you to understand the company and the industry.

The two-wheeler industry in India has witnessed a slow demand off-take mainly due to an increase in petrol prices and a rise in prices of bikes/scooters. In this regard, the stocks of the top players, including Hero MotoCorp, Bajaj Auto and Eicher Motors, have been down 13% on average in the past six months.

But according to various experts, the outlook for the two-wheeler industry is strong. This is on the back of many players stepping up on the electrification of bikes pick-up in demand from urban and rural areas, particularly with the festive season coming up, new launches and opportunities in the export market.

So, how does Hero fare against the competition? Do the company’s prospects remain bright in the coming years?

What works for Hero MotoCorp?

Hero MotoCorp is one of the leading players in the two-wheeler industry, focusing mainly on entry-level two-wheelers. That is, for mid-income category customers. The past few quarters have been difficult for the company due to a slowdown in demand. The company reported a 29% decline in volume in February this year.

Hero’s volume decline is slightly higher than its peers. For instance, Honda reported a 24% decline in volume during the same period. Baja Auto and TVS volume was better. The volume decline was around 16% and 7% y-o-y in February 2022.

Despite the weak cues for Hero MotoCorp, the company is on the path to recovery. 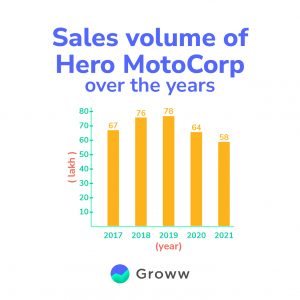 There are a few factors to support this argument. They are:

Even with the demand slowdown, Hero MotoCorp continues to be in the leading position in the domestic two-wheeler segment. According to various media reports, it holds over 32% of the market share in the country.

While Hero had been mainly focusing on entry-level bikes that cater to mid-income category customers, the company has made a conscious effort to diversify its product offerings. That is, it caters to all income categories of customers. This had been in the works in the past few years. The company had been launching bikes in the premium segment, like Xpulse 200 and Xtreme.

Further, it also started to explore the export market, like other players. And slow pick-up can be witnessed in that segment as well. For instance, in February 2022, the export segment saw a growth of 27% y-o-y.

All these growth drivers are likely to show their results in the coming quarters. 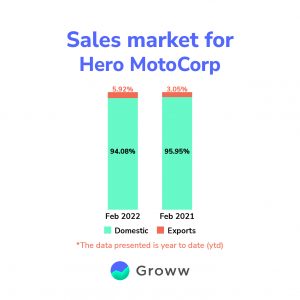 According to many experts, Hero had been slow in diversifying to the premium bike segment and penetrating the export market.

But despite these challenges, the company had been able to retain its dominant market share (domestic) in the two-wheeler industry. To offset increasing raw material costs, the company has taken price hikes. In the recent December quarter of 2021 (FY22), the company took a price hike of Rs 1,000 (ex-showroom price). As per the company’s statement, the management plans to take another price hike in the March quarter of FY22.

Strong brand position and vast dealer network have helped the company. It has a presence in Tier I cities and other cities and towns, especially in under-penetrated Tier II and Tier III regions. Hero’s market position in the country is likely to aid in its diversification strategy, particularly in premium bike segments. 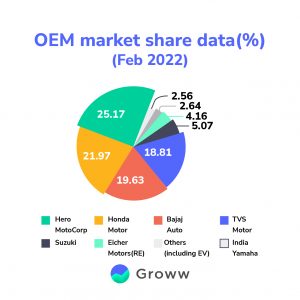 Though Hero MotoCorp is late in joining the EV (electric vehicle) race, the company has a broad range of electric scooter products plans in the coming quarters. Accordingly, it has made its investment in Ather Energy plans to launch fixed battery and swappable battery for electric bikes. The company has joined hands with BPCL to introduce EV charging stations as per media reports. The company has also invested in Gogoro and Poema Holdings for battery swap technology.

The company’s extensive dealer network could come in handy with its EV take off. It has over 9,000 customer touchpoints.

The are other factors that could also aid in the growth of Hero MotoCorp. 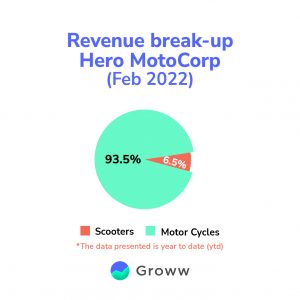 Before investing, weigh the pros and cons of the company.

Hero’s recent December quarter (FY22) performance had been weak. It reported a revenue and profit decline of 18% and 31% y-o-y respectively compared to last year.

But its valuation appears reasonable when compared to its peers. Hero is trading at (PE) 17 times while Bajaj Auto trades at nearly 21 times and TVS Motors is 36 times. 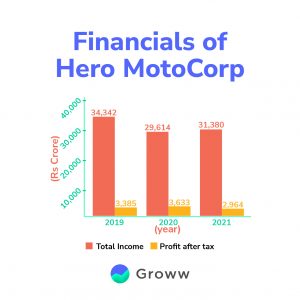 While the stock has multiple positives, there are a few concerns.

Two-wheeler makers, including Hero, feel the pinch with increased commodities prices. For bike makers, commodities including aluminium, steel, rubber and other petroleum products are required. And the prices of these commodities have skyrocketed in the past year. Hero took a price hike in 3QFY22 (December quarter) to negate the raw material cost pressure and is expected to take more in the March quarter. However, considering the segment Hero operates in (entry-level bikes), the headroom to take on more price hikes could be limited. If the prices of the raw materials continue to rise, then Hero’s margin and profit could have an impact.

Though Hero is one of the leading players in the market, it faces stiff competition, particularly in the premium bike segment. Players including TVS Motors, Bajaj Auto and Eicher Motors have a headstart.

Similarly, in the EV segment, not only the established players like TVS and Bajaj Auto are already present, but other players, including Ola Electric, Ampere Electric, and Okinawa, are also competing. Hero is late to join the market, and it could be challenging to catch up.

The stocks mentioned in this article are not recommendations. Please conduct your own research and due diligence before investing. Investment in securities market are subject to market risks, read all the related documents carefully before investing. Please read the Risk Disclosure documents carefully before investing in Equity Shares, Derivatives, Mutual fund, and/or other instruments traded on the Stock Exchanges. As investments are subject to market risks and price fluctuation risk, there is no assurance or guarantee that the investment objectives shall be achieved. NBT do not guarantee any assured returns on any investments. Past performance of securities/instruments is not indicative of their future performance.
Do you like this edition?
LEAVE A FEEDBACK
Want to invest?
Open a Groww account & start investing. It's fast & 100% free.
GET STARTED
Related Posts
Adani Wilmar Analysis – Growth, Revenue & Technical ViewAnalysis: Sun Pharma and its ProspectsHow to Use Arbitrage in Trading?Top Small Finance Bank Stocks in IndiaAnalysis: How is Tata Consumer Products Different in the FMCG Industry?