IOCL vs BPCL vs HPCL: What do they have in common

Do you know what Indian Oil, Bharat Petroleum and Hindustan Petroleum have in common? They are all downstream oil companies in India. They are also the only downstream companies that are listed, as of March 21, 2022.

Downstream companies sell crude oil products: petrol and diesel are two of them that we can associate more with.

The other common factor between these companies is that they are all majorly controlled by the Government of India. They are all also Maharatna PSUs.

Indian Oil retains the highest market share amongst the three.

Comparing companies within the same industry becomes easier because of the availability of industry-specific common parameters.

Over 50% stake in all the three OMCs is owned by the Central Government under the Ministry of Petroleum and Natural Gas. Highest investment by foreign portfolio investors can be seen in HPCL whereas BPCL has attracted the highest interest from mutual fund houses amongst its peers. Among the three corporations, the highest public investment can be seen in IOCL. 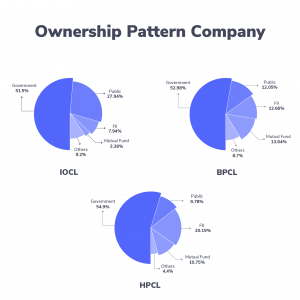 The product portfolios of all the three companies are more or less the same. 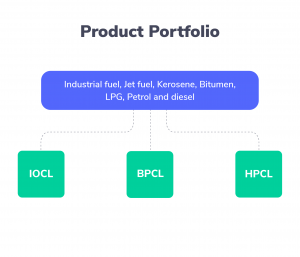 BPCL on the other hand produces and sells:

Refinery throughput is the total crude oil that is used as the raw material and is fed into producing petrochemical products.

In the same period, IPCL had the highest market sales at over 81 MMTPA with BPCL and HPCL nearly at the same spot 38.7 MMTPA and 36.6 MMTPA respectively. 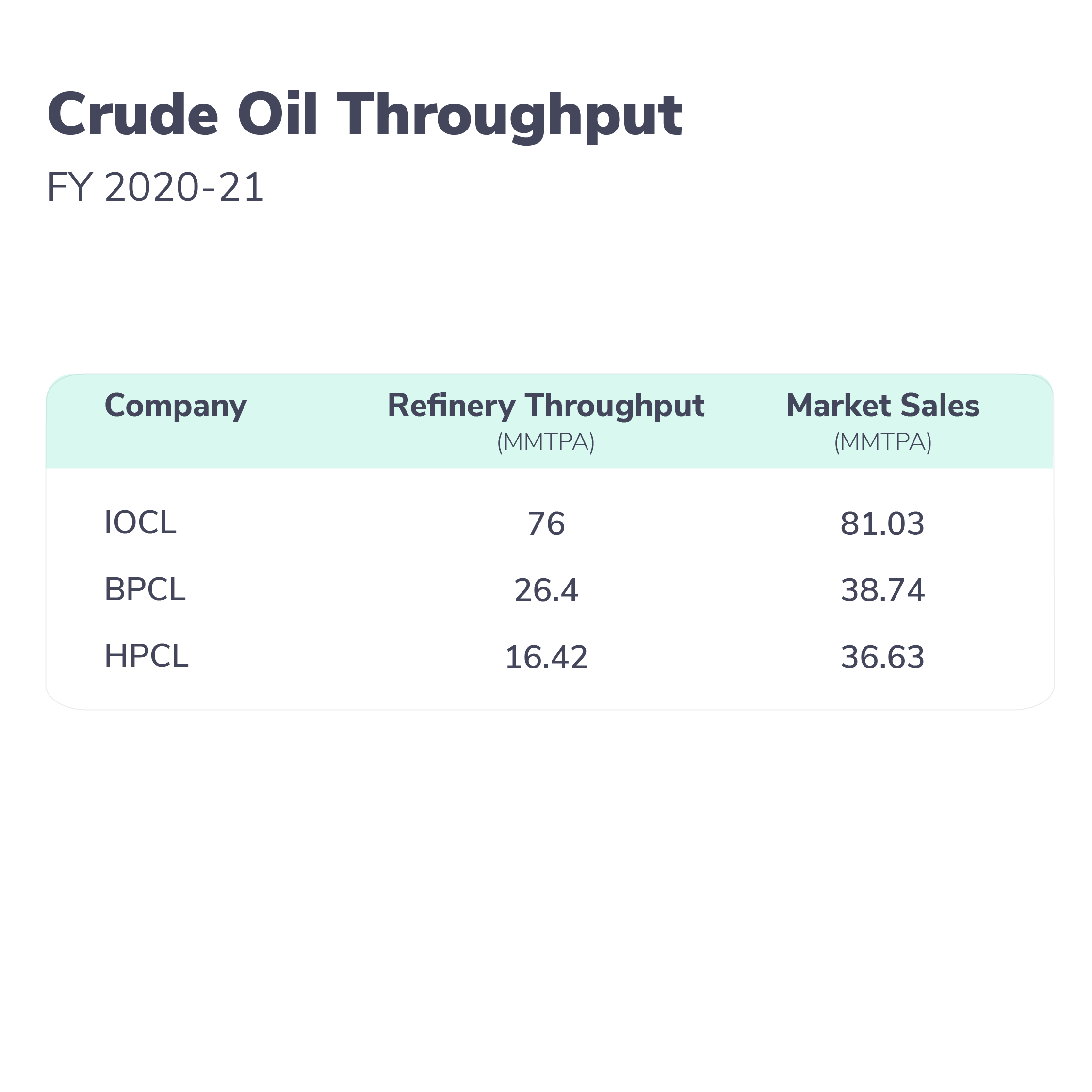 IOCL generated most of its revenue from the sale of petroleum products which amounted to Rs 4,93,127 crore for FY 20-21. It has the highest market share which may explain the highest revenue amongst its listed peers. Sale of petrochemicals fetched IPCL another Rs 19,169 crore in revenue in the same year.

On the other hand, BPCL reported that they generated a revenue of Rs 3,04,197 crore from their downstream petroleum business while exploration & production of hydrocarbons helped bring in Rs 68 crore in FY 20-21.

HPCL reported downstream petroleum revenue at Rs 2,70,333 crore while other businesses helped them make another Rs 244 crore in FY 20-21. 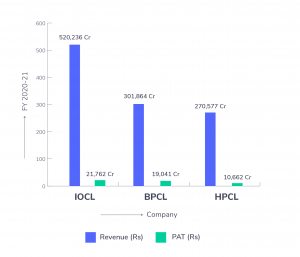 However, the interesting bit to note here is how despite having a stark difference in their revenue and total income, IOCL and BPCL are neck-to-neck in terms of PAT. It is even more fascinating to note how BPCL boasts of the highest EPS amongst its peers at Rs 96.44 per share. While HPCL takes the third spot at Rs 70.57 per share, IOCL ranks third at an EPS of Rs 23.57.

An important aspect to consider when pitting OMCs against each other is Gross Refining Margin or GRM. GRM is what a company earns by converting one barrel of crude into fuel.

For the financial year 2020-21, IOCL reported the highest GRM at $5.64/barrel followed by BPCL and HPCL. 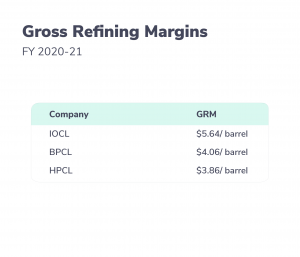 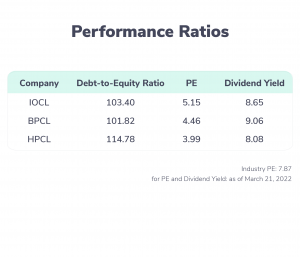 IOCL is a public-sector enterprise with the Government of India holding a majority stake in the company. IOCL is India’s largest Government-owned oil company with its products and services catalog including exploration and production of petrochemicals, crude oil, and natural gas.

BPCL is another Government-owned oil corporation. Incorporated in 1952, the company was started in British India in 1891 as Rangoon Oil and Exploration company to explore the presence of oil in North Eastern India.

IOCL is the largest OMC in terms of size, volume, and the amount of crude oil it handles. However, the market may be ascribing higher valuations to HPCL and BPCL, the other 2 largest Oil Marketing Companies in the country, as of March 2022. All three are government-controlled and are heavy contributors to the growth and development of the nation through their far-reaching network of petrol pumps and gas stations across the length and breadth of the country. Please consult your financial advisor and assess your risk profile before taking stock positions in the market.