Airlines Industry in India: What’s in store and What’s ahead?

The stock of airlines players including Indigo Airlines and SpiceJet are up nearly 7% and 5% today (Mar 9, 2022). This is mainly on account of India’s re-opening of international air travel. While it may appear positive, the airlines industry has a long way to go for recovery.

The Indian airlines industry had been walking on a tightrope. This is even before the outbreak of the virus mainly due to stiff competition and high operating costs. With the rapid spread of infections throughout the country between 2020 and 2021, the sector was crippled. Lockdown and movement restrictions were imposed for both domestic as well as international air travel. The sector was disappointed with this year’s budget as well with no sops offered in terms of reduction of excise duty, or any other tax concessions.

But as the economy world over slowly re-opens, the Indian airline industry sees a few positives (since last year). These include low crude oil prices, re-opening of international and domestic travels, easing of travel-related documents for air-travel passengers, and potential gains for the airline operators since the grounding of Jet Airways.

Considering the global uncertainties on Covid, rise in inflation and crude oil prices and global tensions, whether the operators can spread their wings fully to take flight remains to be seen.

Analysing the Airline industry in India

With economies world over having started their air travels, there is a slow recovery in the Indian domestic and international air traffic. In January 2021, the domestic air traffic was at 77.34 lakh but in November 2021, it increased to 105.16 lakh as per the data available with DGCA. And there is potential for growth for airline carriers in the country, considering the low penetration in India.

While the positives appear to favour the airline industry, it gets complicated, and the grass is not so green on the other side.

To understand the industry better, there are a few key factors that weigh on the entire industry. If you are planning on investing in an airline company, you as an investor too should understand them. 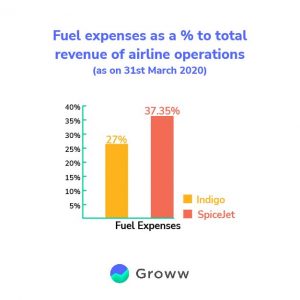 The fuel prices are volatile too, considering their relation to crude oil. While the Government subsidies the fuel prices, it is still high for the operators. Further, for the company to meet their operational expenses, the airline operators, most of the time, have to pass on any increase in fuel prices to the customers. This not only erodes the margin but reduces their demand. Ultimately, this impacts the earnings of investors as well. 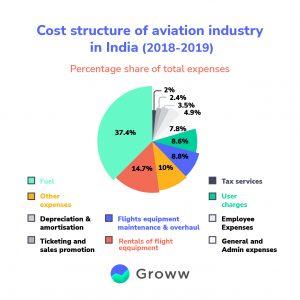 Despite high capital investments and infrastructure costs, airline space is highly competitive. There are nearly 15 airline operators in India, a combination of large and small regional players. These large players include SpiceJet, Air India, Indigo, and Go Air. And smaller ones include Vistara, Star Air, Air Deccan, and Air Heritage. 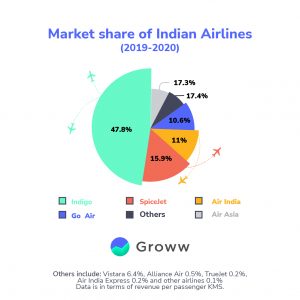 Most of them are low-cost carriers (LCCs) which put pressure on the pricing (of flight tickets). Often those airlines with weak balance sheets may not be able to absorb the fuel price increase and had to pass the hike to its customers. This could have an adverse effect on the revenue of the company. However, airlines have begun to unbundle their services. That is, operators now charge for services such as baggage, seat selection. While this could help reduce costs and aid revenue, these are not significant contributors.

Indian airlines also face competition from the Indian railways as well, particularly with the introduction of fast trains.

The airline industry in India requires heavy investments and as such the debt levels of most airline players are high. This situation was exacerbated with the outbreak of pandemics where the debt levels of all the players, big and small, shot up sharply. And their performances were in the red. For instance, in FY21 Indigo incurred Rs 5,830 crore of operating loss against an operating profit of Rs 1,626 crore in FY20. Its debt too expanded 27%. In FY20 its debt was at Rs 27,726 crore while it was Rs 35,153 crore in FY21. According to a few media reports, the Indian airline is expected to lose $4.1 billion in the year ending March 2022.

The debt-to-equity ratio and interest coverage ratio is key metric to watch out for for an airline company as well. Keeping track of the finance costs of the airline companies helps to understand whether the industry is exploring options to reduce additional costs or earn revenue. If you see any positives in this regard, then there is a possibility of market expansion.

Other factors that could impact the companies in the airlines industry include regulatory changes, RBI approvals (for foreign investments), rupee appreciation/depreciation against US dollars, delay in setting up of airport infrastructure facilities and aircraft bans and other related issues (like the case Boeing 727).

What works for the airline operators in India?

While the skies are dominated by large airline players such as SpiceJet and Indigo, small regional airlines are making headway in the market too. These include the upcoming airlines Akasa and Go Air.

Though the airline industry is facing a turbulent period, it could be temporary. Airlines play a crucial role in integrating the world economies and connecting people. Many experts expect consolidation in the industry before stability. This is particularly after Tata’s takeover of Air India. If Tata decides to integrate its airline operations, it could be the largest airline in the country.

While competition, pricing pressure and weak demand is weighing on all the players, there are a few positives that work for the industry. Many veteran investors want to invest in this industry because of its importance in the economy and its potential to grow in the country. 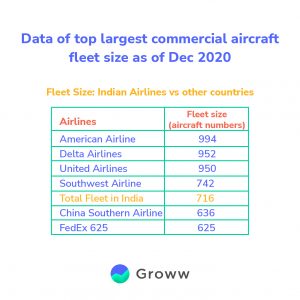 Further, steady albeit slow improvement in the airports, runway, and other infrastructure facilities, bodes well for the industry’s prospects. Additionally, with the rise in middle-class income, air traffic could also increase.