Top Gainers and Losers In The Stock Market : 20206 min read 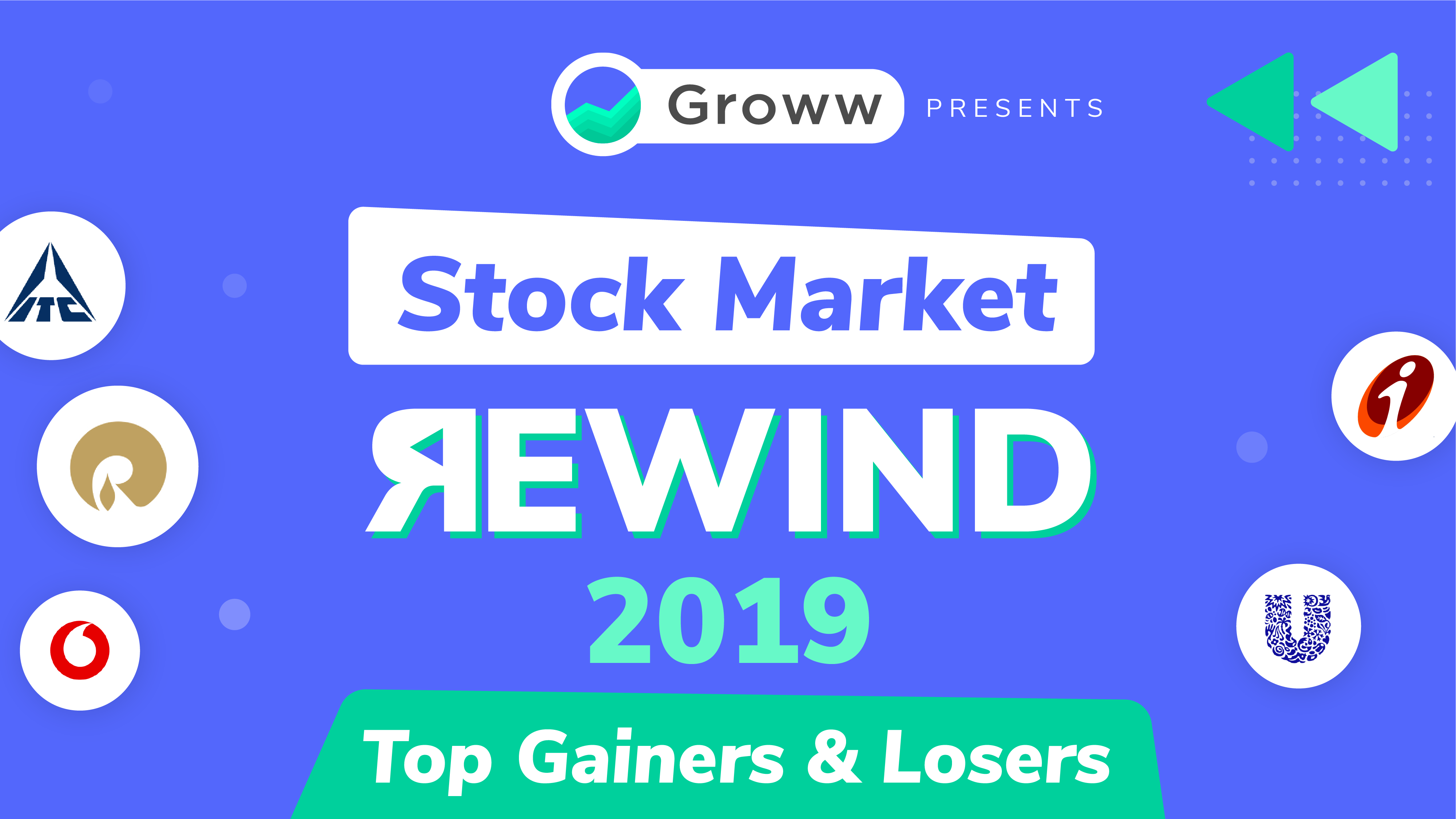 January is the best time to take stock of how the past year has been. People generally evaluate their personal, professional and financial lives on various parameters, which they have set for themselves. The year 2019 has closed at new highs, while moving from lows around budget and again in mid- year due to macro factors. It bounced back after the corporate tax rate cut announcement and has been trading mostly positive since then.

Both Sensex and Nifty touched life highs and the overall returns from Indian markets have been at close to 11 percent, which is good keeping in mind all the events of the year. There have been strong inflows from foreign institutions as well as from domestic mutual funds.

Investors have been rewarded handsomely, gaining more than 100% in 12 months in some of the stocks. While in others, like it happens in markets, there have been some downside as well. Here is a list of gainers and losers in the stock market for 2019

We have picked five from each basket here .

This was the first Asset Management Company (AMC) to list on the Indian stock exchanges in the year 2017. The AMC has been a steady player and has benefited from financialization of household savings in the last two years. It is now the fifth largest AMC by way of Assets Under Management (AUM). The share price on January 1, 2019 was INR 156.10 and had jumped to INR 354.65 on January 1, 2020. It returned 127% in one year thus richly rewarding its shareholders. As per analysts, there is scope for further uptick in the share price with the company’s focus on enhancing market share and also with the Japanese Nippon Life taking over the management and control.

The stock listed in August 2018 at a price of INR 1726.25, a premium of 57 % to its issue price of INR 1100. It is the largest AMC by way of AUM, has a high share of individual customers who invest mostly in equity schemes and stay invested longer.
It has been a consistent performer with a good dividend payment record. Although the valuations seem to be rich, the outlook for HDFC AMC is positive.
A strong management, pedigreed parent and wide distribution network further add to the stock’s attractiveness.
The stock has gained 109% from January 01, 2019 to January 01, 2020.

This stock has been making highs on news of new power project commissioning. It has total installed capacity of 2.50 GWac of renewable energy projects. The total portfolio for Adani Greens is 5.29 GWac out of which 2.79 GWac is under implementation. It recently commissioned a 75 MW Wind power project and has signed a Power Purchasing Agreement with the Maharashtra State Electricity Distribution Company Ltd.
With the Government’s focus on renewable and alternative power, the company is set to perform better in the coming year as well and thus the stock has been slated for further growth.
The closing price for this stock was INR 41.40 on January 1, 2019 while it climbed to INR 174.75 on January 1, 2020. This translates to a return of 322% in one year.

A steel tubes manufacturer with eleven manufacturing facilities across regions in India, the company is involved in the production of electric resistance welded (ERW) steel tubes. The products include black pipe, galvanized pipe, pre-galvanized pipe and coils. The company’s share price on January 1, 2019 was INR 1172.80. It was up 61% on January 1, 2020 at INR 1892.80.

There were some others stocks which did not perform as per investors’ expectations and were unable to make money for their investors.
Let us look at five such companies

2019 has been particularly bad for telecom companies and specifically for Vodafone Idea, which posted a whopping INR 50922 crore loss, the highest for any company in the history of corporate India. The share price which was INR 23.25 on January 1, 2019 had slipped to INR 6.10 on January 1, 2020. The huge loss has been on account of provisioning for dues related to Adjusted Gross Revenue (AGR) as per the ruling of Supreme Court in this matter.

The bank, a part of Nifty 50 had been in news much during the year for various reasons like RBI findings against its balance sheet disclosures, a forced change in the owner & MD, stake cut by owner and former MD. It has faced multiple hurdles in raising Tier 1 and Tier 2 capital so far.
The share price which was INR 184.25 on January 1, 2019 has fallen to INR 46.65, a fall of 75% in one year.

The company had a particularly bad year when due to high debt, the group effected a distress sale of its stake in IT company Mindtree to L & T, then there were certain Income Tax related issues and in July came the news of group founder VG Siddhartha’s death.
The share price of CCD, which was at INR 278.25 on January 1, 2019 fell to INR 40 on January 1, 2020, an erosion of 86% in 12 months.

Like many other Housing Finance Companies, Indiabulls Housing Finance too had a poor run in 2019. There was a sudden fall in the share price in August 2019 when company’s rating was downgraded and the outlook was changed to negative. The IL & FS crises and its aftermath had serious cost and liquidity issues for NBFCs and HFCs and affected IBH Finance as well.
The share price which was at INR 844.75 on January 1, 2019 had declined to INR 312.70 on January 1, 2020, a fall of 63%.

The year 2019 has proved to be a slow year with falling sales for the auto sector. For the nine month period – April-December 2019, domestic sales for M & M were down 11% at 3.6 lakh units. Including exports, total sales were down 12 per cent to 3.8 lakh vehicles in April-December. The company, like many others from the auto space had announced production cuts due to the slowing economy.
The share price which was INR 773.35 on January 1, 2019 was down at INR 536.60 on January 1, 2020, a fall of 31 % in one year. Though analysts are largely positive on the prospects of the company from a medium to long term perspective.

The stocks and companies discussed here are in no way recommendations. From a wide universe of listed companies, these are some stocks which, during the last year were in news and made money for their investors. Some stocks, on the other hand, failed to meet the investors’ expectations.

For some investors, stock selection is uplifting, for some, getting it right is therapeutic, for others it is about ‘always winning’. Whatever the reason is for selecting a particular stock, returns drive the whole process. Everyone is in it for wealth creation.
When an investor has decided to get into the market arena, apart from the company’s performance, it is the homework, research, patience, grit and luck that is at play.

Even while looking for the next best idea, it is always prudent to include some high quality stocks in the portfolio. As 2019 has proved once again – quality trumps others when markets are indecisive or are constantly going down due to micro or macro factors.

An outperformer should keep the investor grounded and should act as a motivator for identifying winning qualities of the particular company for replicating its success. An underperformer, at the same time should make the investor cautious and more focused.