This week on Groww, we reflect on one of the major crises that have played havoc in the lives of investors.

This event can be considered as a trigger for how the markets are behaving in the current scenario, whereby investors have lost a lot of their wealth.

By now you must have guessed that we are talking about the IL&FS saga.

In operation for the last three decades, Infrastructure Leasing and Financial Services (IL&FS) is a ‘shadow bank’ or a non-banking financial company that provides similar services to that of a traditional commercial bank.

Also, IL&FS is not a deposit-taking company, therefore, it is not stringently regulated as other banks.

The subsidiaries of IL&FS are the following:

Infrastructure Leasing and Financial Services (IL&FS) bonds and long-term loans were downgraded to junk status by rating agency ICRA at the beginning of September.

ICRA downgraded the company’s Rs.4,800 non-convertible debentures from AA+ to BB as IL&FS Financial Services defaulted in payment obligations of bank loans (including interest), term and short-term deposits and failed to meet the commercial paper redemption obligations due on 14th September.

The BB rating suggested that IL&FS debt was considered to have a moderate risk of default when it comes to timely servicing of interest and principal repayment.

Given the high level of debt, IL&FS would find it extremely difficult to meet its financial obligations (currently, IL&FS has been able to pay only 20% of the Rs. 250 crores worth of term deposits to SIDBI, which is just a part of the loan) and therefore it is in dire need of funds.

Therefore, this event has the potential to dent India’s credit market.

Banks (mostly public sector banks) and mutual fund houses have high exposure to IL&FS and therefore these institutions have also felt the brunt because of the sequence of events that have panned out.

The main reason why the company is in a dire state

IL&FS today has piled up too much debt in the short term, while revenue from its asset has been skewed to be generated in the longer term.

How will this affect mutual fund companies?

As per the latest reports, around 33 funds (varying across all types of categories, such as liquid funds, short-term bond funds, etc.) had exposure to IL&FS.

The default rating of ‘D’ on short-term scrips of IL&FS from the rating of A4 (two weeks before), led many mutual fund houses to mark down the value of the schemes which had invested in IL&FS.

The total value of holding by these mutual fund houses as disclosed by CRISIL (at the end of August 2018) stood at around 2,308 crores.

As per specified guidelines, mutual fund houses downgrade the value of securities as per their internal valuation norms, once the investment falls below the investment grade of BBB.

This eventually led to a drastic fall in the NAV (Net Asset Value) of these funds.

In some cases, the entire value of the fund has to be written down.

How does this affect investors?

The sequence of events has directly impacted investors, whereby their investments have significantly eroded in value.

The main concern for investors is in the case of commercial papers.

Commercial paper is a key component of money-market mutual funds, which have surged in popularity in response to low bank deposit rates in the last two years and persistent inflation.

Let us look at the category of funds that will be impacted the most:

Losses have been maximum in the case of liquid funds, which have forced many institutions as well as low-ticket retail investors to move to high-quality short-term debt securities.

This going forward can have a domino effect as IL&FS sits atop a web of 169 subsidiaries, associates, and joint-venture companies, which makes the default even more worrisome.

As per a report, approximately 1500 crores of investments in NPS are currently at risk.

At the same time, this crisis is also likely to impact insurance as LIC is the largest shareholder of IL&FS and is also one of the eight NPS fund managers in the country.

According to CRISIL, a total amount of approximately Rs.1950 crores have been invested by nine FMPs in various companies of the IL&FS group.

Therefore, the NAVs for these schemes have corroded significantly, thereby eroding shareholders’ wealth.

What are the after-effects?

Following the IL&FS saga, investors have been worried about a surge in volatility among financial stocks, which took shape in the plunge.

Rumours broke out that Dewan Housing Finance Limited (DHFL) had defaulted on one of its debt obligation which took the market by surprise, thereby sparking a bloodbath.

The rumour started with the news that DSP Mutual Fund had on 19th September 2018 sold AAA-rated paper of DHFL Ltd. at a yield of 11% (while the fund house wanted to sell the bonds at 9%-9.5%).

A yield of 11% is usually charged for bonds that have a lower credit quality.

As a result, DHFL shares tanked by more than 55%, which was the heaviest fall in 21 years.

The fall had a domino effect on other housing finance companies with the likes of Indiabulls Housing Finance Limited plummeting by 16.77%, Can Finance Homes by 6.82% and LIC housing Finance coming down by 14.1% that particular day. 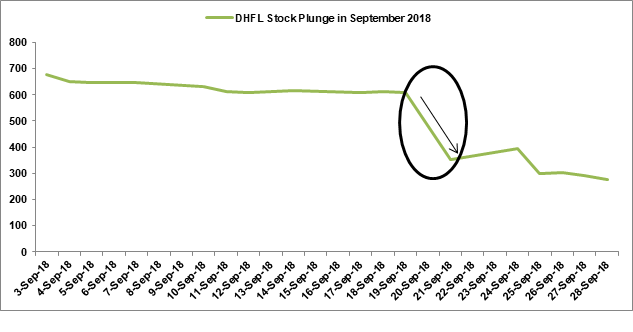 What is the road ahead?

In the absence of a quick strategy by the regulator and the government, this crisis would translate into a solvency issue leading to a domestic credit crisis inflicting wounds on banks, mutual fund houses, and other financial institutions.

Also, what’s worse is that most of the group’s assets include financial claims on infrastructure projects such as roads, tunnels, water treatment plants, power stations, etc. which cannot be liquidated to escape the mess.

Role of the company

The company has identified nearly 25 projects which will be up for sale.

By selling these assets, it intends to bring down its debt by approximately Rs 30,000 crore which is one-third of its total, but the process can take over a year.

Role of the government

Taking charge of the situation, the government has moved the National Company Law Tribunal (NCLT) to supersede the IL&FS board and change the company management.

Many powerful players have a deep interest in preventing the group’s collapse, including blue-chip companies and sovereign-backed shareholders.

It is interesting to note here that the parent company is categorized by the Reserve Bank of India as a ‘systemically important institution’.

A rescue plan similar to the Satyam crisis is what the centre has gone for.

It has proposed to appoint 10 nominee directors (including the likes of Mr Uday Kotak), who will report to the NCLT for relevant plans to resolve the issue.

So, if you look at the current scenario of the market and various events playing out, it is best for investors to continue to remain invested as panic selling will lead to booking significant losses.

People that have SIPs can obtain a greater number of units for a similar amount of investment.