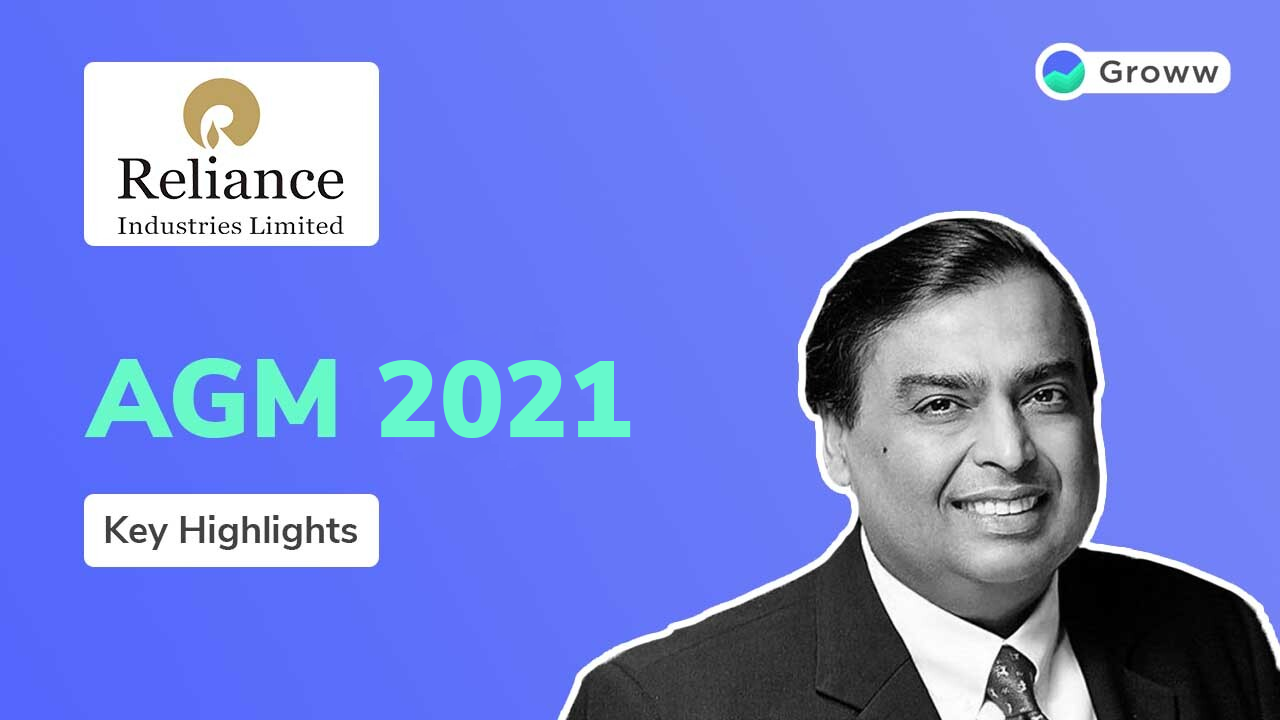 On 24th June 2021, at precisely 2 pm, Reliance Industries Limited, the largest Indian company through market capitalisation, held its 44th Annual General Meeting. Due to COVID precaution measures, the meeting was held virtually. As expected, the AGM outlined various key measures and initiatives taken by the company.

Launch of Jio Phone Next

This was, perhaps, the most important announcement of the AGM where the CMD of RIL, Mukesh Ambani, and the CEO of Google, Sundar Pichai, introduced the Jio Phone Next. Touted to be the most affordable 4G enabled Smartphone, developed in collaboration with Google, Jio Phone Next would be launched in the markets from 10th September 2021. The phone would allow millions of Indians to own a Smartphone and access the internet for their needs.

Some of the phone features include an optimised version of Android, a Smart camera, the latest Android updates, translation facility, among others.

Another collaboration with Google is the development of 5G services in India. Reliance Jio Infocomm Limited and Google Cloud would form a cloud partnership wherein Google would help Jio launch its 5G services in India. Intending to make India ‘2G Mukt and 5G Yukt’ Mr Ambani said that Jio’s 5G services would be meant for individuals and small and medium-sized businesses.

Mr Ambani also pointed out that Jio had tested its 5G services and managed to get a connection speed of more than 1 GBPS. He mentioned that Jio had received the regulatory approvals for launching 5G services in India and trial spectrum to test the same. The 5G standalone network has been established pan India with trial centres at Navi Mumbai.

In 2019, Reliance offered a 20% stake to Aramco for USD 15 billion in its oil-to-chemicals business. In this AGM, it was announced that the Saudi Aramco deal is expected to be finalised by the end of this year, i.e. 2021, and Reliance Industries would enter into a formal partnership agreement with Aramco.

Furthermore, it was announced that Saudi Aramco’s Chairman, Yasir Othman Al-Rumayyan, would join the Board of Directors of RIL as an independent director.

Mr Ambani highlighted that Reliance Industries raised USD 44.4 billion, which was the largest amount raised by any company globally. Out of this, Rs.3,24,432 crores worth of capital was raised through equity sale in Jio, offering a rights issue and asset monetisation.

Support To The Employees In The Pandemic

Highlighting the employee compensation strategy adopted by Reliance, the founder and Chairperson of Reliance Foundation, Mrs Nita Ambani, said that despite the pandemic, the company did not cut its employees’ salaries or any other types of compensation.

Reliance Industries’ CMD, Mr Mukesh Ambani, announced the company’s plan to build four Giga factories to promote green energy uses. These factories would be engaged in manufacturing and integrating all the key components of a new energy source, and creating a sustainable renewable energy ecosystem. To this end, the company would invest Rs.60,000 crores over the next three years to implement these initiatives.

Moreover, Mr Ambani also said that RIL would invest an additional Rs.15,000 crores towards building value chain, future technologies and partnerships that would include upstream and downstream industries.

Besides the agendas mentioned above that dominated the 44th AGM of Reliance Industries Limited, other announcements also deserve mention. So, here’s a look at them –