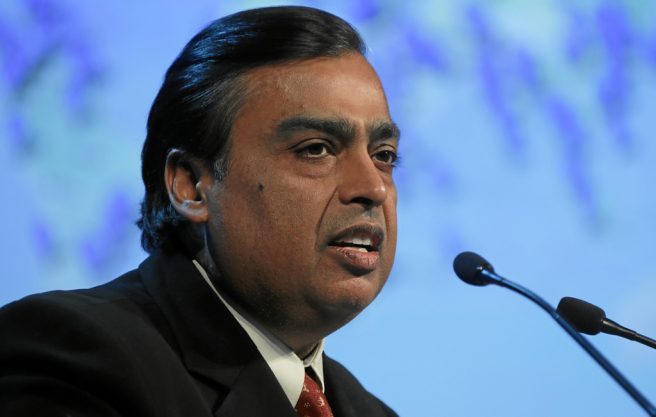 The chairman of India’s largest conglomerate has made major contributions in the telecom and refining sector and is estimated to be worth $44.3 billion.

On Friday, Reliance Industries Ltd. rose by 1.6% to a record high of 1099.8 Rupees, according to Bloomberg.

Jack Ma’s wealth, stood at $44 billion at the close of Friday.

Ambani has added $4 billion to his fortune this year. The major reason is the success of his telecom upstart Reliance Jio Infocomm Ltd.

Earlier this month, the tycoon unveiled plans to leverage his $215 million telecom subscribers to expand its offerings to the e-commerce sector and with direct plans on taking  Amazon and Walmart head-on.

Ambani is best known for executing large-scale projects and spearheading the construction of the world’s largest refining complex in Jamnagar.

He owns the most-widespread data network globally and claims to have India’s biggest as well as most-profitable retail firm.

At this month’s annual shareholder’s meeting, Ambani said Reliance saw its, “biggest growth opportunity in creating a hybrid, online-to-offline new commerce platform,” involving the group’s Reliance Retail Ltd. and Reliance Jio businesses. The “size of Reliance will more than double” by 2025, Ambani said at the meeting.

Jio will introduce a fiber-based broadband service across 1,100 Indian cities by August, in what is said to be the world’s largest greenfield fixed line rollout, anywhere in the world.

Within few weeks of the announcement, Reliance re-entered the $100 billion club after more than a decade.

He used the same venue to announce his disruptive telecom venture with free offers that eventually forced smaller rivals to quit the sector and the biggest ones to consolidate and merge.

The billionaire inherited Reliance from his father Dhirubhai Ambani, who is credited with sparking an equity culture among middle-class Indians and using their savings to build the groups textile and petrochemical manufacturing units.