Bitcoins: The Future of Investing? 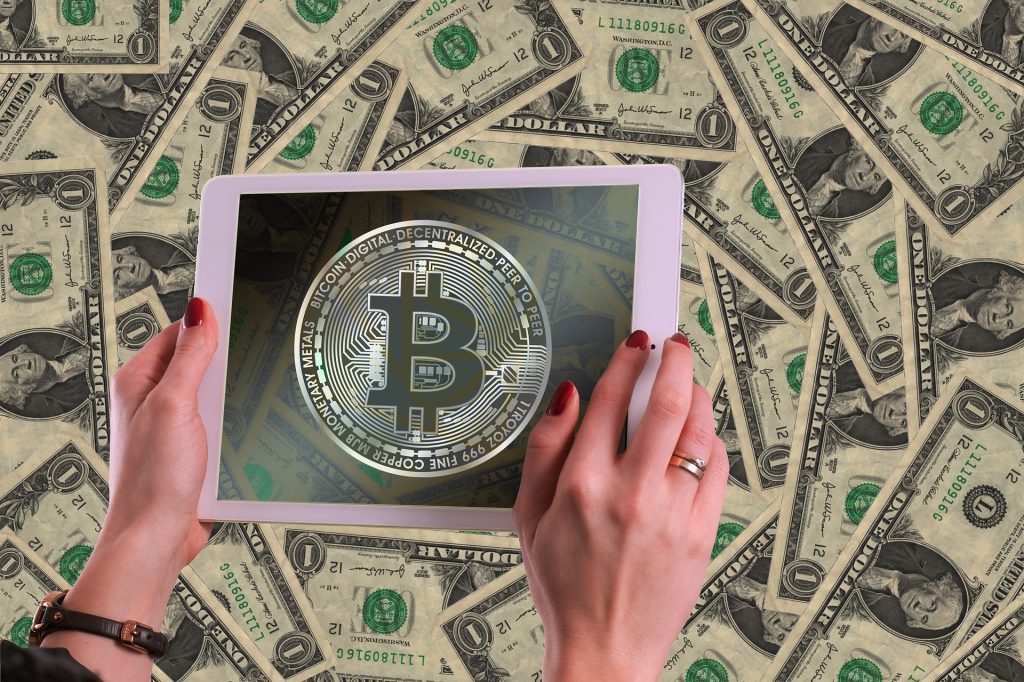 Bitcoin is one the biggest cryptocurrency which has attracted a lot of attention over the last 2 years.

At this point in time, there is a lot of speculation around the future of bitcoin.

Given the fact that the journey of bitcoin has been volatile, at best, this article seeks to address the future course of bitcoin. It throws light on what bitcoin is and how it works, what are the major trends around bitcoin and what can be expected in the future.

This article is for all Bitcoin and cryptocurrency enthusiasts.

It is for anyone who wants to think of investing in bitcoin or for those who are unsure as to should they hold on to their current investment in bitcoin, purchase more to average their costs or sell and close their exposure.

In layman’s language, bitcoin is a digital currency. It is decentralized, which means that there is no government, institution (like a bank or RBI) or any other authority, for that matter, that controls it.

The owners of bitcoin are anonymous and it connects buyers and sellers through encryption keys. Evidently, this system is different from using names, tax IDs, or social security numbers as is the case normally.

One of the most unique things about Bitcoins is that they are mined by powerful computers connected to the internet. No bills to print or coins to mint.

How Do Bitcoins Work?

This process starts with a bitcoin miner (usually a person or a group, or a company), mining bitcoin by doing a combination of advanced math and record-keeping.

The working of the entire process is explained below:

Risks of Investing in Bitcoin

All of you must be aware that Bitcoins are highly risky and unstable instruments to invest in.

Bitcoins can make you rich or take away everything you own within a day. It is a game of risk assessment and requires investors to have knowledge of what they are doing.

The major risk associated with any investment in Bitcoins is that it is extremely volatile.

Moreover, there is not enough data for experts to analyse them, so people are investing with imperfect information and joining the herd of speculators.

This might lead to form a bubble that will eventually burst causing widespread losses to investors.

There is also a legality issue with a lot of confusion over legality of Bitcoins in India. Bitcoins are not recognised by Reserve Bank of India (RBI), though haven’t been declared illegal by RBI or any other authority in India.

How Is the Value of a Bitcoin Determined?

It is very interesting to note that the value of a bitcoin is market determined, i.e. by what people will pay for it. In this way, there’s a similarity to how stocks are valued.

Satoshi Nakamoto, the founder of bitcoin, dictates that only 21 million bitcoins can ever be mined. About 12-14 million have been mined so far. There is only a limited supply of bitcoin, as is the case with gold and other precious metals, but no real intrinsic value.

It is widely contended that the process of price discovery is the primary driver of volatility in bitcoin’s price, and invites speculation on investment in bitcoins.

Regulations Around Bitcoin in India

RBI has maintained a non-supportive stand towards all the crypto-currencies in general and bitcoin in particular. In an official statement, it cleared its stand around this topic-

In view of the associated risks, it has been decided that, with immediate effect, entities regulated by RBI shall not deal with or provide services to any individual or business entities dealing with or settling VCs. Regulated entities which already provide such services shall exit the relationship within a specified time. A circular in this regard is being issued separately.”

This means that RBI considers investment in crypto currencies as a risky affair and does not advise common small-ticket investors to invest their hard earned money in this asset.

In line with this stand, RBI has asked Banks and other regulated entities, to stop providing any kind of services involving dealing with bitcoin in any manner whatsoever.

On the future of crypto currencies, finance minister Arun Jaitley on November 30, 2017 said that recommendations are being worked at.

“The government’s position is clear, we don’t recognize this as legal currency as of now,” Jaitley said when asked whether the government has taken any decision on crypto currency.

It is upon the investors, both current and potential, to decide for their own and take their own call. However, RBI has also said that it will launch its own version of centralized digital INR running on blockchain.

According to a study by a well reputed market research firm, Juniper Research, there are serious doubts over the long-term prospects of Bitcoin.

Per Windsor Holden, the author of the report- ‘The Future of Crypto currency: Bitcoin & Altcoin Trends & Challenges 2018-2023’ believes that “Bitcoin has no intrinsic value.

Like any asset, it is worth whatever someone is prepared to pay for it, but it has no meaning or existence beyond the confines of the ledger. It is a bubble, and there is a strong possibility that this bubble could burst in the near future.”

The rationale for the above statement is two-fold:

According to the above-mentioned study, the daily transaction value in September 2018 is 230,000. This number is a very steep decline from the high of 360,000 approximately in late 2017.

Similar is the scenario with the daily transaction value. It has fallen to approximately US $670 million from over US $3.7 billion last year.

Some of the possible factors which could be holding back the growth of Bitcoin and other crypto currencies could be the restrictions on the trading and use of bitcoin.

Basically, the non-acceptance of Bitcoin as a regular currency by many large governments such as India and China has been a major growth deterrent.

Investment in Bitcoin from common retail investors has also slowed significantly after banks decided to ban the use of credit cards to purchase Bitcoins.

All in all the environment around the use of Bitcoin has been hostile to say the least. Many researchers and analysts fear Bitcoin as a bubble which could be moving towards the end of its life.

However, these are mere speculations and there is no certainty around this fact.

It may be an interesting fact to know that India is the 8th country to ban bitcoins.

In China, Bitcoins and other cryptocurrencies are totally banned after the Chinese government cracked down on cryptos and ICOs.

Similarly in South Korea, laws have been made more stringent around buying and selling of bitcoins, but they are not planning on putting a total ban.

In China after the Bitcoin ban, trading volumes surged from 8 million CNY in September 2017 to 266 million CNY in January 2018. Due to an official ban, there was a huge increase in peer-to-peer trading.

One of the most possible outcomes could be development and thriving of an underground market.

It is also a possibility that the government reinstates its view on crypto currency. It could allow it to operate under strict regulations. Crypto exchanges could be allowed to operate through licenses.

This step, if taken, will help in the trading recovery for Bitcoins.

One way or the other, there is a good possibility that the demand for and trade of crypto currencies in general and bitcoin in particular will continue to exist and even increase for that matter.

However one very aspect to be considered is substitution.

Since Bitcoin there has been a huge rise in the number of cryptocurrencies that have hit the street. Many of these are doing really well and the possible threat of substitution for Bitcoin is very real.

From the Horse’s mouth

Much has been said and written around bitcoin and its future, whether or not it is a bubble and so much more. Here is what the who’s who think about the future of Bitcoin-

“Virtual currency, where it’s called a bitcoin vs. a U.S. Dollar, that’s going to be stopped. No government will ever support a virtual currency that goes around borders and doesn’t have the same controls. It’s not going to happen.”

“Stay away from it. It’s a mirage, basically…The idea that it has some huge intrinsic value is a joke, in my view.”

“It’s no accident that I’m one of the few standing before you today from a large financial services company that hasn’t given up on digital currencies. I’m still a believer.”

Emergence and Rise of Other Cryptocurrencies

The success of Bitcoin has naturally encouraged the entry and rise of various other crypto currencies in the market. Now with the advancement and refinement in the use of Blockchain as a tool for solving various business and other problems, some of these relatively new crypto currencies have the potential of becoming a threat to Bitcoin.

Some of popular crypto currencies are:

Ethereum and Ripple are one of the most famous ones and they have received widespread acceptance and investment. Going forward they could pose a threat of substitution to Bitcoin.

The upcoming trend in the crypto world is the emergence of second-generation crypto currencies include altcoins.

These crypto currencies come with more advanced functions that have the promise to harness the computing power of the blockchain. A very good example for this is Ethereum.  It is claimed as the blockchain that can execute “smart contracts”.

To put it simply, these are pieces of computer code that can interact with other coded contracts and perform work. To explain with the help of a use-case, moving money around and making decisions.

In the most optimistic and positive sense, this revolution could be the start of an autonomous financial future which would be dictated by machines rather than humans.

Investment in any crypto currency in general and Bitcoin in particular is a high risk and high return game. Bitcoin is very volatile in nature and one day is enough to wipe out significant wealth.

If you feel it is the right choice for you, go ahead and invest, but make sure that the amount you invest is something which you are not afraid to lose completely.

One mistake that people often commit is of expecting situations and performance to remain the same. If the price of a share is rising, they assume it’ll continue rising.

And the same goes the other way too. A share the price of which is falling is assumed to be a share that’ll continue falling. This is a big mistake.

Just because Bitcoin has been gaining value over the past few years does not mean it’ll go on gaining.

0 Comments on "Bitcoins: The Future of Investing?"