Home » Blog » Crypto » Should you invest in Crypto Currencies or Mutual Funds?

Should you invest in Crypto Currencies or Mutual Funds? 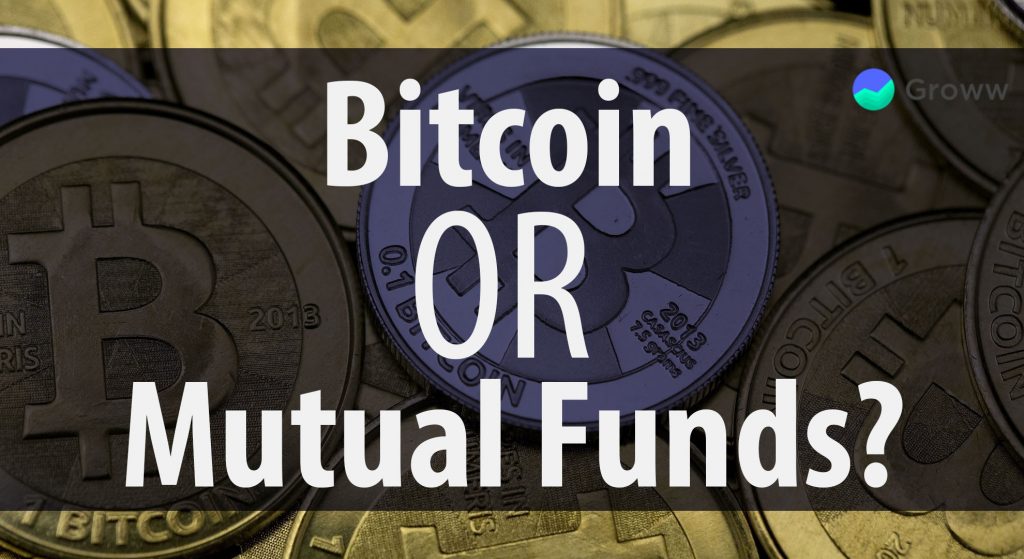 Apart from the markets where we trade equities and other securities, there’s also an alternative capital market where crypto currencies are traded. This market deals with widely known coins like Bitcoin (BTC), Ethereum (ETH), and others. Each of the coins has a price that depends on various factors such as demand, complexity, governing laws and overall stability. Since these are the currencies that have no centralized systems and are basically a virtual currency, their price fluctuates based on numerous factors such as demand, the algorithms used, overall network capabilities and technology.

We do not have to dig deeper into technical aspects of currencies. However, they do have a direct impact on the price of the coin, and if you are thinking to invest in them, it’s a must that you understand them well. Comparing different currencies, their age and total market value can help you understand about the people’s trust and confidence in a particular coin, which in a long run investment can contribute to building better wealth appreciation.

If we talk about the Wall Street or Dalal Street, the only way you can start investing is by buying units of stocks, mutual funds, and other financial instruments. However, with the cryptocurrencies, you can either directly mine them or invest depending on the risk appetite you have. I would suggest doing both mining and investments as it can help an investor gain more benefits out of the cryptos.

The total net worth of all the cryptocurrencies in the market is close to $88 Billion, out of which a majority of the capital is with the Bitcoin, Ethereum, and few other coins. So let’s discuss how can we mine and invest in these currencies.

How to get profits out of crypto currencies?

These are called crypto currencies or crypto coins as they have an algorithm attached to help avoid the re-spending of the same coin and also makes sure that everybody in the network is aware of the transaction that occurred.

As discussed there are two methods by which you can invest and start earning from cryptocurrencies:

If you have some old computers that are lying around without any use, you can convert them into mining machines and start earning the crypto coins. Depending on your hardware capacity, coins can be collected to make profits.

However, there is an issue with that. First of all, in order to do that you need to be familiar with basics of computers. You need to analyze the capabilities of your hardware and see if there is any profit that you can earn after deducting monthly operating cost and electricity bills. Each of the coins requires a different set of hardware. For Bitcoins or Litecoins there are some specifically tailored machines that can mine the coins at much faster speed than an average computer. However, on the flip side, a powerful computer with good graphic cards is required to mine the coins in Ethereum network.

If you are not comfortable with setting up your own gear at home and start mining, there are some online companies as well which help you set up your mining system instantly in the cloud, to which you pay monthly subscription charges depending on the computation power you have rented.

Another way to get good returns from the crypto coins is by investing directly in them as per the opportunities. It’s no doubt that whoever invested in the initial coin offering of the bitcoins are now millionaires and have gained millions by a mere investment of ₹50,000 or less. The currency has sky-rocketed since its launch in the year 2007, and people are still continuing to invest in a hope that someday it would make them rich.

The era was nothing more than a technology gold rush and whoever invested is now a millionaire. You can also start investing in coins like Bitcoin by using different exchanges and platforms. There are few trusted platforms in the market such as Poloniex and Coindesk, that help you start investing in the coins. For the Indian market, Unocoin is known for BTC investments, however, the reviews by other investor aren’t pointing towards a positive feedback. Investors are advised to analyze each and every platform before signing up or start investing, and we neither endorse or criticize any platform.

Note: Since this is a decentralized system, some companies put up fake websites to fool the investors. You should be well aware of what you are doing, as once the money is lost, there’s no way to recover it.

Is it safe to invest in crypto currencies?

If you know what you are doing, then yes it is safe to invest in cryptocurrencies. First of all, you need to make sure the wallet you are using is stored on your computer with strong passwords. Secondly, whatever investment you make in the coins, say BTC, always transfer it to the wallet address that you’ve created on your computer.

Even then if you think this isn’t safe, then you can buy some cold hardware wallets which will store the bitcoins for you.

Always make sure that you have access to your wallets and you shouldn’t re-install Windows, or any other operating system on your computer as it will wipe out the wallet you just created. There have been a lot of cases where people forgot their access codes for the wallet and lost the entire wealth. Apart from this, hacking computers to steal coins is another common activity that investors face.

How stable are crypto currencies market?

The crypto currency market is highly unstable, and it can make you rich in a day or destroy everything you ever invested within a fraction of a second. Look at the classic case of Ethereum, at the beginning of the year 2017, the price was close to approximately $40, which later increased to approximately $400 and now it’s currently trading at $200 which is about ₹14,000.

Another example of what could go wrong in the crypto coin realm is the case where an exchange dropped the price of one ETH coin to $0.10 and triggered the stop loss set by investors.

The base of these crypto coins, Blockchain, is in its very early phase and there is a potential for mass adoption. South Korea and few other countries are already moving in a direction to legalize bitcoins. These kinds of activities promote the market value of a coin and in return provides good returns to the investor.

It is a game of risk assessment and time for which you can keep your money invested. There have been few speculations in the market pointing towards a huge appreciation of Bitcoin value. Some analysts believe that the Bitcoin prices can go up to as high as $10,000 which is close to 7 Lakhs Rupees as per the current exchange rate.

How Crypto Currencies stack up against Mutual Funds?

Greater the risk, greater the return and so are chances of loss. With crypto currency the same principle is applicable. If you want to try your luck and hope to become to rich overnight, or in a week, then cryptocurrencies are your best bet.

The extremely high-risk nature of these coins is what sets them apart from the mutual funds, or any other similar investment instruments.

Which one is safe? Mutual Funds or Bitcoins?

Without a doubt, Mutual funds. Mutual funds are regulated and governed by the laws in India, whereas the coins like Bitcoin aren’t under any legal system. Bitcoins are best known for their anonymity, and there’s no way to know who is the owner of a wallet and what are his personal details. This makes it easy for criminals to pull off a scam and steal Bitcoins from people in the name of exchange or whatsoever.

Hacking of computers to steal the Bitcoins is also another issue where people have lost all of the coins in the wallet.

Mutual funds, on the other hand, are much safer when it comes to keeping the investment safe and secure. The only risk MFs have is the fall of the market where investors can lose a chunk of their purchase. The net asset value per unit will fall down and will result in overall reduction of the asset value. There are very few chances where someone can hack into your mutual fund accounts and steal all of the money.

Should I invest in crypto currencies or Mutual Funds?

Well, it depends, whether you are a seasoned investor or recently started buying and how much you know about the crypto market.

Approach for investing in financial instruments is much different than investing in the crypto currencies. Everything that happens in the coin market is in one way related to the demand and supply, and also other factors such as legalization, the technology behind a coin, popularity and what future it holds.

Whereas in the mutual funds, the performance is calculated based on the type of resources it is investing into, the top holdings, age and how the overall performance has been for the past three to five years. At Groww, if you open any of the portfolio or mutual funds you can see all the factors that are affecting returns on your investment, whereas with the crypto coins factors change within minutes and prices fluctuate every second.

Are Bitcoin investments so terrible?

With any type of market linked investment risk is always there, and same goes for the Bitcoin investments. Generally, the idea is to be well aware of what we are dealing with and what are the chances whether it is going to fall or grow in the near future. Similar to small cap companies on the market, crypto currencies can also increase to 20-30 percent in a day or even fall down to a point where they are no more eligible to be on the market. Meaning, that the value has reduced to almost zero, and the coin has become non-existent.

However, if we look at the performance of BTC, then the coin has proven to be very stable and trust worthy. Investors can think of investing in it as the fall won’t happen in a day and loss of the entire wealth overnight is very unlikely.

Is it legal in India? What’s the process to invest and redeem?

Bitcoin trading is still not legal in India. Soon the Government Of India is planning to introduce laws where earnings from crypto currencies would be put under an income tax slab allowing acceptance of BTC in the market.

Right now, you can use Indian or foreign exchanges to invest and redeem the money, however, just like the exit loads in the mutual funds, BTC exchangers also take up a percentage to convert the amount to USD. The amount can be transferred directly to your bank or PayPal account.

To try out your luck, you can start investing in the ETH or BTC, as relatively these are the most stable coins in the market right now. However, when it comes to mining, mining ETH is much more profitable as the overall complexity is much lesser than that of BTC. Later you can convert all your earnings from ETH to Bitcoin and wait till it touches the roof.

I hope you must have enjoyed this article, do share it with your fellow friends and investor and let them know about other possible ways by which one can start earning good returns on the investments.

Disclaimer: The views expressed in this article are that of the author and may not be same as that of Groww.