Home>Blog>Markets>General Elections 2019 – What Economic Battles Will the Upcoming Government Deal With?

General Elections 2019 – What Economic Battles Will the Upcoming Government Deal With?

It is D-Day and the general public is excited/anxious about the government and of course, the next Prime Minister of the world’s largest democracy.

To recap, the exit poll data indicated a continued mandated for the current government, and the capital market reacted positively to the same. Check out our take on what a wise investor should do amidst exit poll.

The exit poll has cheered the market to an extent. But is the road easy for the new government?

In this blog, we seek to discuss the challenges the incoming government will see in the next 5 years!

The Indian market had remained volatile in 2018. The S&P BSE Sensex ended the unpredictable year at 36,068 up 5.9% from the start of the year. Significant events included – crude oil prices, global trade-war tensions, rupee volatility, liquidity concerns, and policy action by central banks drove the market in a zig-zag manner.

Sectorally, barring Information Technology, FMCG, and Banking, others ended in red and mid-cap, and small-cap indices finished 2018 on a somber note.

During Q1 of 2019, the market remained volatile on the back of credit downgrades of some large and notable NBFCs that defaulted on their repayment obligation. Also, the election preparation resulted in investors’ remaining cautious about participating in the market.

Concerns Around the Economy

In the past one and half years, the market witnessed events such as the reintroduction of long-term capital gains tax, banking scams, IL&FS failing to repay its debt obligation, weakening rupee against the US dollar, rising crude oil price and many more.

These events have plagued the growth of the economy. Even in today’s scenario, where the benchmark is crossing 40,000-mark for the first time on one side, an investor is not very comfortable investing in debt funds, given the kind of instability that is surrounding the credit.

The upcoming government has a lot to do to ensure whether reforms launched in the previous five years have been executed.

With the decline in commodity prices (mainly metal, crude) due to the trade war between superpowers and oversupply in the local market and inflation is likely to remain under check.

However, the government needs to ensure that the growth rate, price of essential commodities, and the interest rate trend is in sync with its stance.

Also, the government needs to ensure that the central bank does its bit in a fair manner to ensure liquidity in the market, along with supporting credit and growth without compromising on the asset quality of any financial institution. 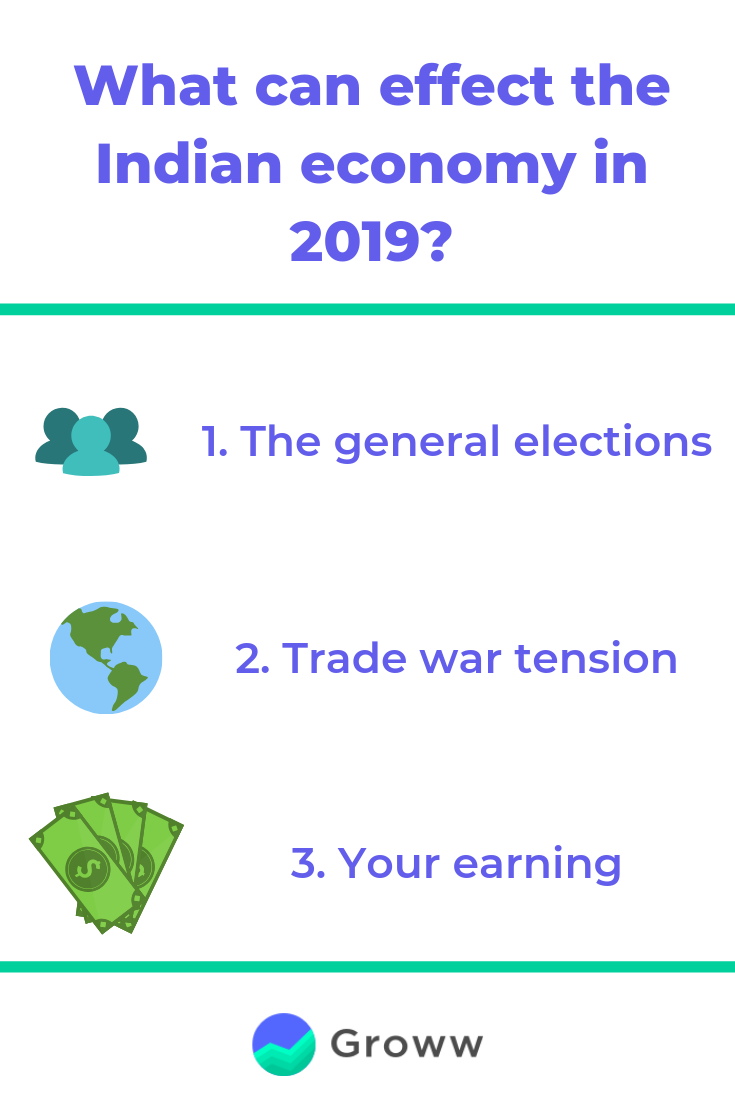 2. Falling Crude to Support the Currency

Along with controlled inflation, the lowering crude oil price is likely to provide a renewed thrust on the fiscal stimuli. Thus, the government’s renewed focus on fiscal stimulus remains critical for the medium term.

While there was some intervention seen from the government in the past months when petrol and diesel climbed high, the focus on the same remains to be watched.

The Indian economy has strong demographics that are likely to provide the much-needed cushion to growth. It also acts as a shield from any significantly negative impact from the US-China trade war or global slowdown.

While the market is undoubtedly very huge, revival in consumption from rural areas, particularly the farmer’s community remains critical.

Also, revival in private capital expenditure remains a key as an economy can’t move on the path of growth only on the back of government expenditure.

As the dust settles on the latest Lok Sabha elections with the results confirming the exit poll of past days, an investor should now look for long-term investing.

We can’t negate the fact that good governance and reforms remained the flavor of the last five years, but the economy is still paralyzed with issues at the grass root level regarding execution. Thus, an investor should be cautious in making his/her picks.

While the Rajya Sabha and the RBI are in sync with the government, and it denotes greater sustainability, one cannot rule out the hiccups in the execution of reforms.

We reiterate our stance – don’t be very aggressive in buying at the present level and you should stick to your financial plans and Systematic Investment Plan as the market will provide you with ample opportunities over time to top-up.

Lastly, with the current state of stress in the debt market, we believe an investor should only cash in with highly liquid and highly safe names at least for the foreseeable future.

If we have to sum up in a line, irrespective of who forms the government, there is a list of the daunting tasks that needs to be done and thus for an investor persistence and commitment to a sound investment remains the key mantra for success.