Home » Blog » Personal Finance » Budget 2021: What are the Differences Between Direct and Indirect Taxes

Budget 2021: What are the Differences Between Direct and Indirect Taxes 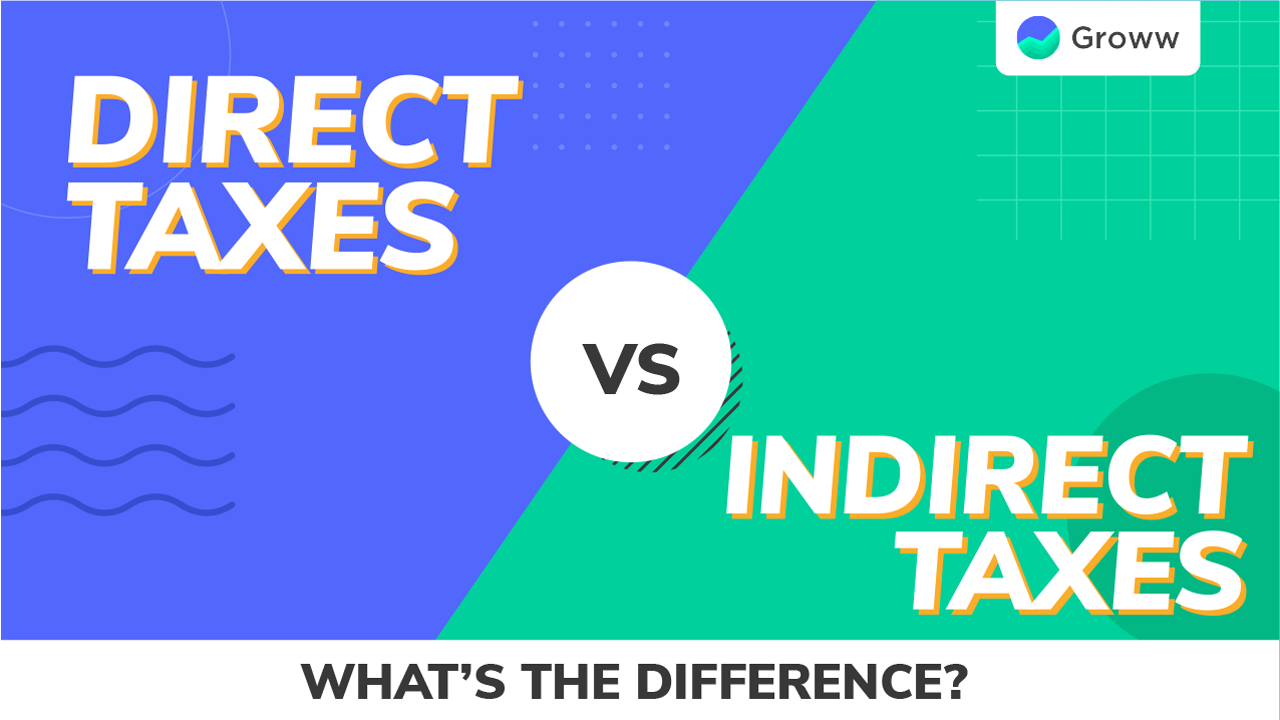 When it comes to tax, there is a lot of jargon around it which might often feel overwhelming.

When it comes to tax, there is a lot of jargon around it which may often feel overwhelming. Such as -during the last quarter of the year (Q4 FY 2021 in this case) many analysts predict the required run rate for tax growth to meet the estimated total gross tax revenue forecasted during the budget.

Don’t worry, we will explain the prevailing Direct and Indirect tax structure in India in a simplified and user-friendly manner.

Tax is a compulsory fee which is imposed upon individuals or corporations by the government (Central and the State Government in India). The tax revenue helps in meeting various public expenses across sectors of the economy. The basic classification of tax, that is important to understand, is Direct tax and Indirect Tax.

Direct tax is the tax that is levied directly by the government on the taxpayer who can be an individual (like a salaried employee) or a corporate (like Reliance Industries), according to the income and wealth of the taxpayer.

Direct taxes are levied/ imposed and collected by the central government itself. The Income Tax Department is the apex body in charge of monitoring and governing the payments of income tax.

Direct tax is non-transferable, which means that tax-payers are not eligible to pass direct taxes on to another individual or corporation.
A critical aspect with Direct tax is that the responsibility of paying the direct tax falls entirely on the taxpayer. For simplicity sake, in a direct tax structure, the liability to pay the tax and the burden of the tax falls on the same person.

Direct tax is non-transferable. This means that the tax-payers shall not be able to pass on the direct tax liability to any another taxpayer, be it an individual or a corporation. This in stark contrast to the indirect tax structure, which we will take up later in the article.

There are a variety of Direct taxes in India. Some of the most important ones being, the income tax, the corporate tax, the wealth tax and the capital gains tax.

Income Tax is the tax which is required to be paid by an individual (such as a salaried employee) based on his/her calculated taxable income for a given financial year (example, FY 20-21 is from April 2020 to March 2021).

As per the Income Tax Act, the term ‘individual’ is a broad-term which also includes Hindu Undivided Families (HUFs), Association of Persons (AOP), Body of Individuals (BOI), Co-operative Societies, Trusts and any artificial judicial person.

The income tax department, levies Income tax on individual taxpayers (defined above) on the basis of a tax-slab system. The tax-slab system means that different tax rates are prescribed for different ranges of income.

It is prescribed in such a manner that the tax rates keep increasing with an increase in the income of the taxpayer. Such a structure of income tax paves way for a progressive as well as a fair taxation structure in the country. Herein, the rich pay more tax as compared to those who earn lesser. Given the structure, the income tax slabs tend to undergo a change during every budget as per the government revenue forecast and the country’s demographics while keeping in mind the well-being of the taxpayers.

As per the Budget 2020, taxpayers were given an option to choose either :

Individuals are eligible for certain deductions from their gross taxable income under Chapter VI-A. One of the most common deductions is the deduction under Section 80C, wherein the individual taxpayer can claim a deduction of up to INR 150,000 by way of making certain eligible investments.

Corporate tax is the tax that is levied on almost all businesses (such as small mom and pop stores) and companies (such as Reliance Industries) operating in India.

According to the Income Tax Act, both domestic and foreign countries are required to pay corporate tax. The corporate tax imposed on domestic companies is based on their universal income, while foreign companies are taxed as per their income generated within India.

The following rates are applicable to the domestic companies for AY 2020-21 based on their turnover:

The following rates are applicable to foreign companies for AY 2020-21 based on their turnover:

Additionally, corporate tax has a unique aspect called the Minimum Alternate Tax or MAT. Herein, all the companies (which includes foreign companies) are required to pay tax at the rate of the minimum alternate tax – which is 15% on book profits (calculated as per the Income Tax Act), in case the tax calculated as per above normal provisions is less than 15% of book profits.

Capital gains are any profit that arises from the sale of a ‘capital asset’.

Following items are not included in the definition of a ‘capital asset’- personal goods, agricultural land, and defined bonds.

Gain from the sale of an asset which has been held for a period of 36 months or less is a short-term capital gain. For instance, if a concerned taxpayer sells his/her equity shares in Jan 2021 which had been purchased in Jan 2020 (after holding it for a period of less than 36 months), any income arising will be treated as short-term capital gain. Also, it shall be taxed accordingly.

Indirect tax is a tax levied by the Government on goods and services consumed and not on the income of an individual or corporate. The distinguishing feature of indirect tax is that, unlike direct tax, it can be shifted from one taxpayer to another.

Goods and Services Tax or GST is the present indirect tax structure in India. It has replaced many indirect taxes in India such as the excise duty, VAT, services tax, etc. The GST Act was came into effect on 1st July 2017.

GST is levied on the supply of goods and services. It is a single domestic indirect tax law for the entire country.

GST has removed the cascading effect – which is the tax on tax – on the sale of goods and services. Since the GST regime eliminates the tax on tax, the cost of goods can be decreased and the rates of Indian manufacturers and suppliers become more competitive.

GST is technologically driven whereby most of the operational activities related to GST such as GST registration, GST return filing, application for tax refund or response to notice can be done online on the GST portal. This accelerates the processes and makes the system more efficient and makes tax evasion difficult. Moreover, this helps bring the supply of more and more goods and services under the formal tax framework.

There are three taxes applicable under the GST regime- these are CGST, SGST & IGST.

Different GST rates are applicable on the supply of different goods and services. Following are the GST rates applicable in India-

12% rate slab – processed foods, computer and accessories, among others

It may be noted that the tax on alcohol and petroleum products does not come under the purview of GST.

GST seeks to eliminate tax on tax. Herein, at the time of paying tax on the final product, the tax payer can reduce the input tax – that is the, the tax they have already paid on their purchases (called input tax credit) and pay tax on only the remaining/ additional amount. This is called Input Tax Credit which again eliminates the tax on tax.

For example, in the case of a manufacturer selling a final product, say cheese, the output tax stands at Rs. 100. However, he already paid Rs. 50 as input tax while purchasing the raw material for making cheese, say milk. He can thus receive an input tax credit of Rs. 50 on the output tax he is required to pay. Therefore, he needs to pay only the difference of Rs. 50, i.e., Rs. 100 – Rs. 50 to the government as Goods and Service Tax.

This enables more and more businesses to come under the formal tax structure and therefore increase the tax base and indirect tax collection for the government.

Experts recommend that the Government may consider making healthcare services either zero-rated or levy only a concessional rate of 5% GST with input tax credit available. This is with the aim to bring down the costs.

Moreover, the reduction in GST rates for clinical trials (from 18%) performed in India for foreign companies may also be desirable, as they may bring more business in to the country.

The country will also be wishing that no additional cess, such as COVID cess, is introduced in the budget on February 1, 2021 by the Finance Minister. There are expectations from the retail investors towards change in the/ abolishment of the present long-term capital gains tax structure. This will boost investor sentiments and attract FDI and FII flows in to the country and provide a fillip to the Indian capital markets.

We will keep you updated with the actual budget details as well.