The Financial Scenario of India: 7 Major Challenges for Nirmala Sitharaman

‘The narrative related to economics is, I think, very well understood even by the common man’– Nirmala Sitharaman, Finance Minister of India

Echoing the above statement, do you think India has found a common man’s  Finance Minister in Ms Nirmala Sitharaman?

We’ll have to wait and watch.

As Ms Sitharaman shoulders the responsibility of the finance portfolio, the expectations from the stakeholders- markets, corporates, economists, policy think tanks and the common man are high. The reasons for this are easy to decipher.

The global and domestic economy is going through a rough phase and many challenges lie ahead for the Finance Minister on the economic revival front. We shall delve into the current financial scenario of India and the expectations surrounding India’s first woman finance minister.

Sitharaman has shown the door to 12 Income Tax officers on grounds of corruption, within days of taking charge. Will the FM’s ability to take swift decisions to bode well for the Indian economy?

which needs similar handling for India to leapfrog into the top 3 economies globally.

Upon her assuming office, the official numbers released of GDP growth at 6.

8% i.e. a five-year low for the financial year ended March 2019 served as a reminder of the huge task at hand. 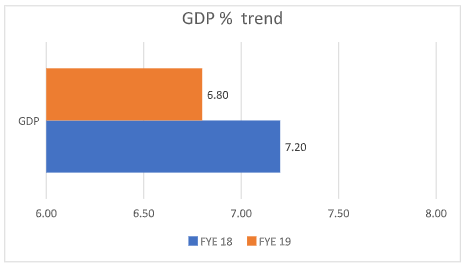 This indicates that India’s economic performance has fallen behind China’s in the first quarter. China is also encountering a slowdown clocked a GDP of 6.4% in Q1 2019-20. This also falls short of economists’ expectations of a 6.3% growth.

This leads some economists to believe that the economic slowdown might be a short-term phenomenon with the potential of a drastic reversal in the coming quarters.

Adding to the slowing growth, additional concern areas were the decline in private investment, growing unemployment rates, severe liquidity problems plaguing the NBFC sector and a drop in domestic demand.

This stand was aggravated by the fiscal scenario faced higher spending requirements to fund the Government’s socio-economic schemes and the need to maintain the fiscal deficit within its target of 3.4% of GDP.

To view the above situation from a different perspective, if the challenges are evident, it helps tackle the problems in a better and holistic manner.

What Is the Task at Hand?

If the ministry is able to identify the problem zones in the economy, the Finance Ministry would be in a better position to resolve the above pain points by the inclusion of appropriate solutions in the forthcoming budget, expected to be presented on 5 July 2019.

The budget could lay out the future roadmap and the objectives to be achieved in the next five years, and the means of attainment, along with the expected timelines.

Clearly, Ms Sitharaman is faced with no easy task of turning around the economy, especially at a time of global trade uncertainties given the faceoff between China and the US.

‘This job needs decisiveness and balance and I think she brings both of those. She is always unruffled and she can understand complex problems very, very quickly -” says Rashesh Shah, chairman and CEO of Edelweiss.

Can you expect a turnaround in the economic cycle and remain bullish on the markets with Nirmala Sitharaman as the new FM?

I believe reflationary forces will form the backdrop of the next growth trajectory. Mid-Caps remain our preferred space with room for a significant rally going forward.

What are the Challenges To be Addressed?

1. Spurring Growth in the Wake of Falling Private Investment

The hopes of Corporate India are riding high that the finance minister would announce some stimulus package by way of a possible cut in corporate taxes and take immediate steps to ensure adequate credit availability at lower interest rates.

RBI may save the day by reducing interest rates to a lower borrowing cost. RBI has already cut rates in Feb 2019 and April 2019 and might repeat the same.

This might catalyse the economy marginally as loans become cheaper and boost borrowings.

In its first Cabinet meeting after taking charge, the Modi Government announced a further extension of the PMKISAN which aims to provide income support to all farmers.

Thus, the government urgently needs to plug leakages in the tax collection and recovery system to channelize funds to productive social welfare schemes with high impact and wide penetration.

Historically, it has been observed that Central Government expenditure drops in the year following a general election.

2. Easing the Liquidity Situation in the Financial Sector

The recent crisis in the NBFC space has resulted in overcautiousness amongst lenders and has reduced the credit extended.

This, along with the pull out of funds in the markets by the institutional investors, especially from financial sector stocks and Mutual funds with higher exposure to doubtful assets, in turn, has resulted in subdued business sentiment amongst the private sectorS in India.

Practically, this translates into a wait and watch mode amongst corporates with reduced risk taking and lower investments. The downgrade of Dewan Housing Finance Corporation, Reliance Capital and the IL&FS fraud are indications of the presence of stressed assets within the NBFC sector.

As a positive step in this direction, the RBI lost no time in issuing a circular on the resolution of stressed assets on 7 June 2019, with provisioning for stressed accounts of NBFCs with banks also falling in its ambit.

A strong banking system is often the harbinger of robust economic growth. In the past, we witnessed the merger of several PSU banks which strengthened their balance sheets with the amalgamation of Bank of Baroda, Vijaya Bank and Dena Bank.

There are plans on the anvil for further M&A action in the PSU banking space. Further, the recapitalization by the Central Government also spells good news for the banking stocks.

4.Simplifying GST for the Common Man

The GST requires further simplification in its processes, especially in the return and the e-way bill. Already the new return form is in the pilot stage.

This would be a major, ground-breaking economic reform with long-lasting impact on the Indian economy. Thus, this would need to be finalized after detailed deliberations and discussions with all the stakeholders with an in-depth analysis of the pros and cons.

However, as the economy moves from a developing to a developed economy, it is natural that its dependence on direct taxes reduces and its reliance on indirect taxes gets enhanced.

6. Finding a Long-term Solution to the Growing Unemployment Rate

The data released by the Labour Ministry revealed an unemployment rate of 6.1% for 2017-18. This is a worrying rate for unemployment data. Infrastructure and exports can be harnessed to provide employment opportunities to many.

Thus, increased public-private partnership and participation of FDI and a higher allocation of funds by the Finance Minister towards these core areas could provide long term sustainable solutions to the job crisis. Further focus on large scale skill building would help mitigate the unemployment crisis.

Economists believe that another reason for the unemployment worries stems from the GST compliance by the organized sector, which has boosted digital transactions.

The lack of its adoption by the unorganized sector has resulted in significant business loss. However, it must be remembered that for all-around economic development, it is preferable for the majority of business entities to be participants in the organized sector.

Thus, the Government should provide an incentive to encourage the unorganized sector to enter the mainstream and reap the benefits.

The reduced spending is resulting in a pile-up of inventory. This is most evident in the automobile industry, which is suffering from unsold stocks. This could be resolved by enhancing purchasing power in the hands of the consumers by reducing personal income tax slabs or by offering sops to the manufacturers.

However, this needs to be done cautiously as it might result in a higher fiscal deficit.

Experts believe that arresting the slowdown should be an immediate priority for the new Finance Minister. Indian Ratings have opined that FY 2018-19 was the second consecutive year of economic slowdown for India. Cyclical challenges can be resolved through short- and medium-term measures.

However, it is essential to address the structural issues, which are dragging down the growth. At the time of a global economic downturn, it is imperative to strengthen the fundamentals for India to be a resilient economy that can withstand global shocks and has sufficient cushion to absorb domestic economic weaknesses.

Analysts agree that the situation needs urgent remedial action, especially on the policy front. The main culprits are reduced domestic consumption, muted export revenues and a corresponding low fixed investment by the private sector in response to the economic slowdown.

To sum up, both the challenges and opportunities are many, for the Indian economy. India can benefit from the global trade war by better positioning its products and improving its competitiveness.

At the same time, domestic macroeconomic indicators need to be strengthened. To conclude in the words of the analysts at Elara Securities ‘’If there was ever a time since May 2014 that India needed Modi to pull a rabbit out of the hat and turn around the economic prospects of the country, it is today.”