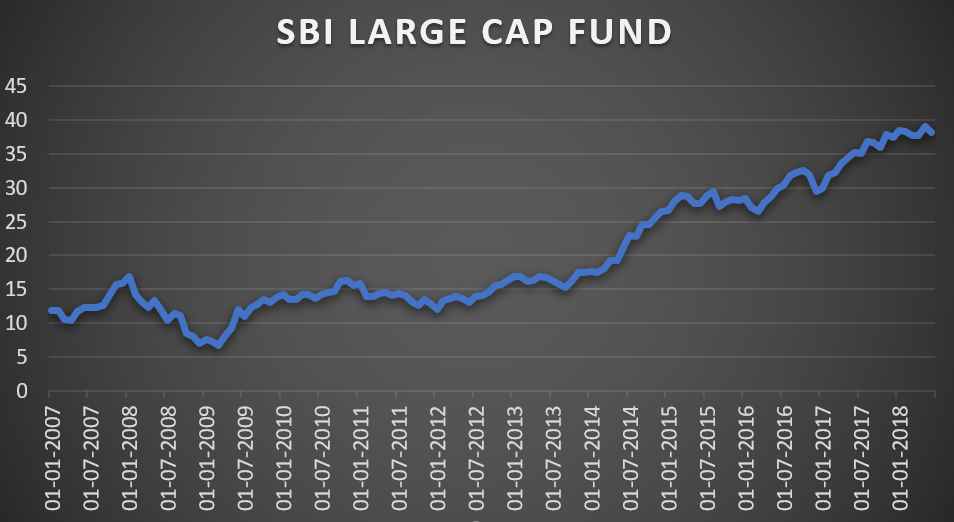 SIP is one of the most recommended ways to invest for new investors and old investors alike. Here is a study that shows how SIP is a great option to invest via.

Is SIP a Safe Bet?

Here is a case study to tell you the importance of SIP’s and how to handle your finances when the market drops. Here we have analyzed the SBI Bluechip Fund with a monthly SIP amount of Rs 2000.

We recorded the  NAV on the 2nd of every month from January of 2007 to  2018. Shown below are some graphs from our analysis

This graph shows the variation of the Net Asset Value (NAV) against time, as observed the NAV dips in the year 2008 when the market was down. The people who invested in 2007 or earlier experienced a loss in 2008 as seen from the graph.

A smart investor will continue to invest in the mutual fund systematically without stopping the payment of the SIP.

A good reason to be using SIP is the fact that this is a mode of investment that is highly flexible and therefore beneficial for all kinds of investors. SIP’s have a lot of advantages when compared to lumpsum investments.

Rupee Cost Averaging is an effective investment strategy that eliminates the need to time the market. All one has to do is to invest a fixed pre-decided amount of money on a regular basis for a long period of time.

The main takeaway from this study is that investments through SIP’s are a relatively safe bet to ensure that the investors realize a substantial return after an appreciable amount of time.

Until 2018, it was the largest point drop in history. It plummeted because Congress (US) rejected the bank bailout bill. But the crash had been building for a long time. India escaped the direct adverse impact of the Great Recession of 2008-09, since its financial sector, particularly its banking, is very weakly integrated with global markets and practically unexposed to mortgage-backed securities.

However, India’s “real economy” is increasingly integrated into global trade and capital flows. It thus did suffer “second round” effects when the financial meltdown morphed into a worldwide economic downturn.

What Lead to the Trade Collapse?

A plausible explanation for the severe contraction in global trade during the Great Recession can be the increased income elasticity of world trade which has risen from around 2 in the 1960s to around 4 in 2008.

This increased elasticity of world trade due to the emergence of cross-border production and supply networks. Economies are increasingly characterized by vertical specialization and this has resulted in a major expansion of intra-industry trade, thereby amplifying contagion during the crisis.

Trade finance is the other major factor that has been proposed. Some estimates say that trade finance contributes to 80% of trade flows and hence it has contributed to around 10% to 15% fall in world trade.

How Was India Affected by the Recession of 2008?

Since the USA is a major superpower, a recession–mild or deeper will have eventual global consequences?

The crisis rapidly developed and spread into a global economic shock, resulting in a number of European bank failures, declines in various stock indices, and large reductions in the market value of equities and commodities.

A slowdown in the US economy was definitely bad news for India because Indian companies have major outsourcing deals from the US.

India’s exports to the US have also grown substantially over the years. But in spite of all this India has successfully weathered the great financial crisis of September 2008.

Indian gross domestic product (GDP) has grown around 6% in every quarter of the most difficult 12 months in recent history. We hope that this article gives you an insight into why systematic investment plans are a very reliable method of investment which is comparatively less risky during the time of a market crash.