The Indian Banking sector is one of the oldest and most popular sectors from the stock market point of view. It is also one of the largest in terms of market capitalization in the Indian stock market.

There are many investors whose portfolio is heavily loaded with banking and finance stocks and at the same time there are some big investors that are not all attracted to them.

Let’s go ahead with Indian Banking Sector Analysis 2018 and see what is there for 2019.

Banking sector performance – Past and Present

Banking is the heart of India’s financial services sector.

The banking industry has undergone numerous changes over the past few years to be on par with international banking norms and standards.

While the banks’ motive has shifted from social banking to profit banking, dependence on ledgers, documents, cheques, and slips has been replaced by electronic initiatives or cashless banking.

Performance of Indian Banking sector in the past three years are: 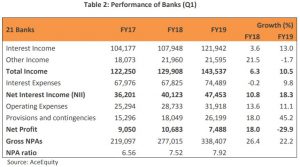 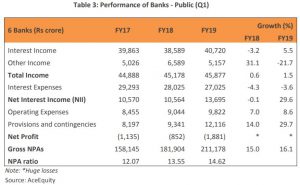 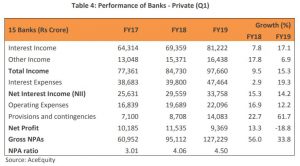 The NPA situation in the Indian banking system has been stabilizing as can be seen in Q1 FY19. There has been an
improvement in growth in credit and deposits. However, net profits continue to remain under pressure.

Also, there is an improvement in credit to industry on a y-o-y basis for May 2018 over May 2017 while that for services rose sharply.

Retail loans growth continued to be buoyant during this period. Chart 1 provides information on growth in credit to different sectors. 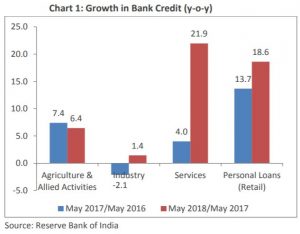 For years, state-owned banks have funded projects in sectors like steel, power, and infrastructure that were not the best in class and they later became non-performing assets when the business cycle turned.

But unlike the past, the current Indian government is a lot less willing to bail out troubled banks by just recapitalizing them. Instead, it is pushing for greater structural changes.

The recognition of and the quick pace of resolution for non-performing assets will strengthen Indian banks over the next few years.

Earlier customers used to approach banks to avail their services, but now banks approach them to market their offerings. With increasing competition and better quality of services, customized service solutions seem to be the future of banking.

The top 6 challenges in the Banking Sector

The banking sector is facing challenges in several areas, but there are six that stand out in today’s market.

The biggest risk to Indian banks is the rise in bad loans.

The slowdown of the economy in the last few years led to a rise in bad loans or non-performing assets (NPAs). These are loans which are not repaid by the borrower. They are, thus, a loss for the bank.

Because of this problem, despite the headlines about banking profitability, banks, and financial institutions are still not making enough return on investment or equity.

Financial technology (FinTech) companies are usually start-up companies based on using software to provide financial services. The increasing popularity of FinTech companies is disrupting the way traditional banking has been done.

This creates a big challenge for traditional banks because they are not able to adjust quickly to the changes – not just in technology, but also in operations, culture, and other facets of the industry.

Regulatory requirements continue to increase, and banks spend a large part of their discretionary budget on being compliant, and on building systems and processes to keep up with the escalating requirement.

These challenges continue to escalate, so traditional banks need to constantly evaluate and improve their operations in order to keep up with the fast pace of change in the banking and financial industry today.

4. Consolidation in the Banking Sector

Currently, the govt is mulling a proposal to merge nonperforming small banks with big banks.

It is not clear whether this consolidation will be between PSU banks or even nonperforming PSU banks can be merged with private sector banks.

This consolidation will have a major impact on banking stocks.

The increased competition among banks is one of the key reason which will put pressure on the bottom line of banking stocks.

In the recent SBI conclave, the SBI chairman cautioned about increased competition among banks. Indirectly she said that it will impact the performance of existing banks.

The reason for new licenses is predominantly financial inclusion.

This, however, happens at junior levels. As a result, there would be a virtual vacuum at the middle and senior level.

For banks in India, 2019 could be a pivotal year in accelerating the transformation into a more strategically focused, technologically advanced, and operationally agile institution, so that they may remain dominant in a rapidly evolving ecosystem.

This metamorphosis is far from easy as most banks grapple with multiple challenges: complex and diverging regulations, legacy systems, disruptive models and technologies, new competitors, and, last but not least, an often restive customer base with ever-higher expectations.

Enhanced spending on infrastructure, speedy implementation of projects and continuation of reforms are expected to provide further impetus to growth.

RBI’s revised framework, which was officially announced in February 2018, is expected to result in transparency, credibility, and efficiency through structural streamlining, standardizing and harmonizing the resolution process.

By mandating weekly information on large delinquent accounts, directing that a resolution plan be worked immediately on default, and setting stringent timelines (180 days from default) for referring an account to the Insolvency and Bankruptcy Code (IBC) process, RBI is establishing an ecosystem where stressed assets would get recognized on time and their resolutions would be quicker than before.

All these factors suggest that India’s banking sector is also poised for robust growth as the rapidly growing business would turn to banks for their credit needs.

Also, the advancements in technology have brought the mobile and internet banking services to the fore.

The banking sector is laying greater emphasis on providing improved services to their clients and also upgrading their technology infrastructure, in order to enhance the customer’s overall experience as well as give banks a competitive edge.

India’s digital lending stood at US$ 75 billion in FY2018 and is estimated to reach US$ 1 trillion by FY2023 driven by the five-fold increase in the digital disbursements.

Development of any country mainly depends upon the banking system.

A bank is a financial institution which deals with deposits, advances and other related services. It receives money from those who want to save in the form of deposits and it lends money to those who need it.

The Banking System in India is dominated by nationalized banks. The performance of the banking sector is more closely linked to the economy than perhaps that of any other sector.

Banking Sector in India functions under the sunshade of Reserve Bank of India – the regulatory, central bank.

Public-sector banks control more than 70% of the banking system assets, thereby leaving a comparatively smaller share for its private peers.

The Indian banking industry has recently witnessed the roll-out of innovative banking models like payments and small finance banks. RBI’s new measures may go a long way in helping the restructuring of the domestic banking industry.

Indian banks are increasingly focusing on adopting integrated approach to risk management. Banks have already embraced the international banking supervision accord of Basel II, and majority of the banks already meet capital requirements of Basel III, which has a deadline of March 31, 2019.

Reserve Bank of India (RBI) has decided to set up Public Credit Registry (PCR) an extensive database of credit information which is accessible to all stakeholders. The Insolvency and Bankruptcy Code (Amendment) Ordinance, 2017 Bill has been passed and is expected to strengthen the banking sector.

In May 2018, the Government of India provided ₹ 6 trillion loans to 120 million beneficiaries under Mudra scheme. In May 2018, the total number of subscribers was 11 million, under Atal Pension Yojna.

Payment banks is a new model of bank, conceptualized by the Reserve Bank of India (RBI).

These banks can accept a restricted deposit, which is currently limited to ₹1 lakh per customer. These banks may not issue loans or credit cards, but may offer both current and savings accounts.

Payments banks may issue ATM and debit cards, and offer net-banking and mobile-banking.

There are six payments banks

2018 was a decent year for banking sector funds.

It is predicted to be a defining year for Indian banking, characterized by credit growth and steady operating profitability, as a new process for dealing with stressed asset comes into effect.

Though majority of the analysis is bullish on private sector banks, some experts are cautioning.

Investors who have a higher risk appetite with the ability to closely track the banking sector and time their investments accordingly can invest in this sector.

But an investor who does not have an understanding of the banking space and cannot handle volatility should avoid these funds.