The Goods and Services Tax Act came into effect in 2017, and since then the act has seen regular amendments.

With effect from 1st January 2022, the GST rates on many everyday things are changing. This includes auto rides, footwear, and even food delivery. But not everything will have a direct impact on you as a customer.

Everyone needs shoes! There is almost never enough. However, the latest amendments to the GST Act has moved footwear that costs more than Rs 1,000 from the 5% tax bracket to the 12% one. This will lead to increased prices and might directly impact your shoe shopping plans.

Earlier, the same tax revision proposal was given for textiles (except cotton) too. The plan was to reduce the compliance burden by bringing all textile products under the same tax bracket. However, after protests from the traders, the decision for GST on textiles has been deferred for now. Another reason to defer the tax revision was to avoid building an informal sector due to a sudden increase in the tax.

The revised decision is likely to come by February. So now may be the right time to move some things from your wishlist to your check-out cart. Go give your wardrobe a makeover before the pockets get smaller!

Uber/Ola auto-rickshaw bookings to see a hike in price

If you are someone who pre-books autos online to avoid chasing them and haggling with the rickshaw driver, this is for you. With the latest changes, two and three-wheelers will come under the GST regime if booked online. They will attract a 5% tax, as against no GST previously. But, this tax will not be levied on the offline mode, which is getting an auto the old-fashioned way.

The online transport booking apps – including Ola and Uber– have created a large market by providing ease of travel. The auto-rickshaw drivers found a seamless way to connect with riders. This also came as a blessing for people looking for a quick, hassle-free ride. With GST rates being levied on the online auto service, discrepancies may arise. It is likely that the aggregator companies may try to pass on some of the costs to customers. Analysts see many price-conscious customers may now go back to the good old offline way of hailing an auto to save on some expenses. It is the convenience you will be paying a higher price for.

Shift in the burden of payment for food delivery apps

With the latest changes, the burden of tax payment will shift to the e-commerce service providers. This means that now it will be the responsibility of Swiggy and Zomato (and the rest) to pay the tax to the government. This was earlier being done by restaurants themselves. It will be reflected as a 5% charge.

The move is directed to bring all registered and unregistered restaurants on the same level. It will reduce the tax leakage due to the unregistered food suppliers skipping out on the taxes.

However, you do not need to worry about controlling your cravings. This structural change just brings a difference in who sends the tax to the government. It will have no impact on the amount paid by the customers.

Membership fees of clubs will be taxed

Earlier excluded from the GST regime, membership fees of clubs will now be taxed. As per the latest GST updates, any activity or transaction supplied by a person (other than an individual) to its members, will attract GST. This means being a member of a club or society will be more expensive. Maybe 2022 is just not for socialising unless you are willing to pay more for it.

As we hail in the New Year, not all things are seeing a hike in taxes. Previously taxed at 18%, the following things will now only be levied a 5% GST. 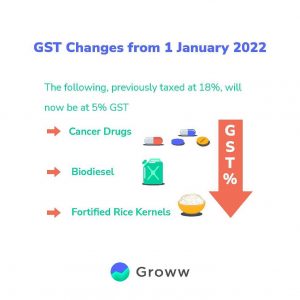 The impact will be manifold and prove immensely beneficial for the country’s development.

Many structural changes are being implemented in the GST Act to make it free from errors and difficulties. Apart from the changes in tax rates, the Act is also making amendments to the way it functions.

The latest announcements have also been for the way the tax is filed. Vendors must be aware of all the forms to be filled out and all declarations to be made. There are revisions in how the Input Tax Credit is processed. The changes are a move towards better compliance and transparency.

There have been many positive changes, other than the hike in prices of a few goods and services. These will hopefully make the current taxation system much more efficient.