Home » Blog » Stocks » From Bookstore to Superstore: Amazon Through the Years

From Bookstore to Superstore: Amazon Through the Years 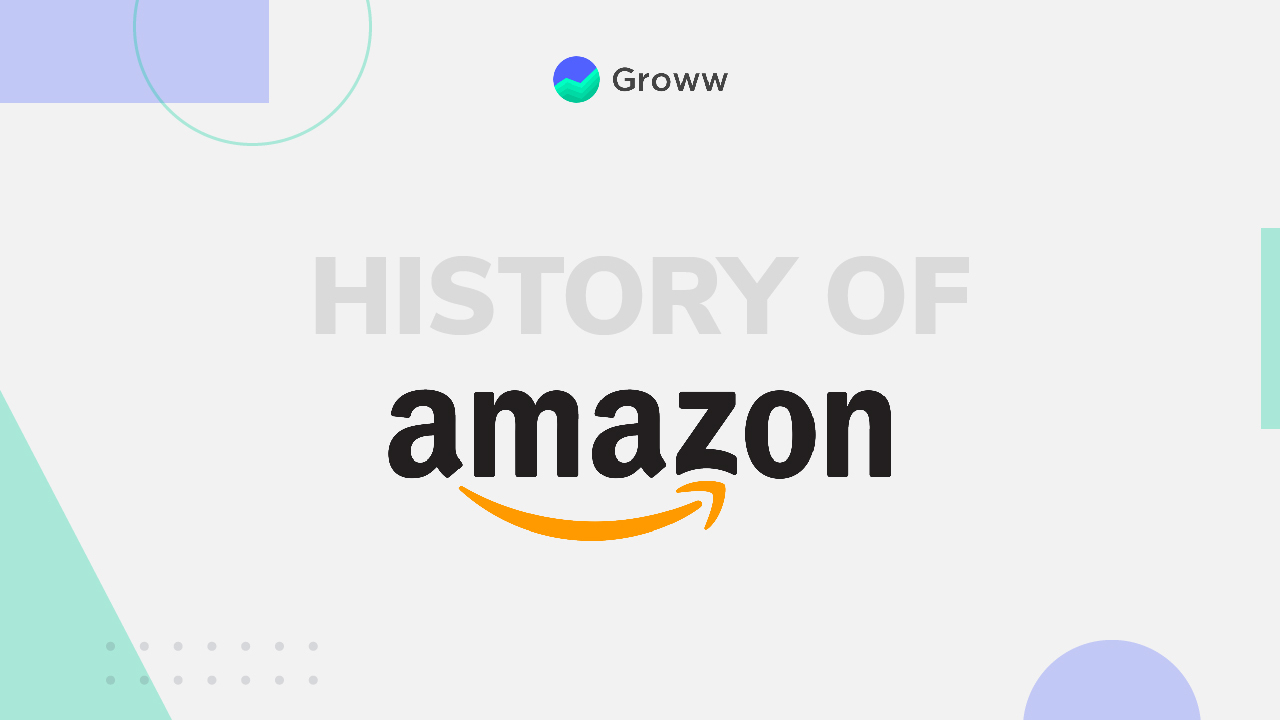 Amazon is one of the few brands that every person on this planet who has ever used the internet is aware of. But what is Amazon? Is it just an e-commerce giant? Or a retail service provider? To be fair, Amazon is an amalgamation of businesses that defy all norms. It has grown to a scale that it is impossible to imagine how it manages to maintain its service standards even today. There is a lot more to Amazon than what meets the eye.

Most people know that Amazon is an ecommerce behemoth. However, from an online single-cell bookseller to having almost every product under the sun, it has come a long way. Here is a look at the journey of this mega-brand:

Jeff Bezos launched an online bookstore in July 1994 called Amazon from the garage of his rented home in Washington. He had a vision of making the company “An Everything Store.” A visionary and entrepreneur at heart, Bezos started Amazon when he was 30 years old.

Jeff Bezos had initially thought of naming the company ‘Cadabra’ (think abracadabra). However, his lawyer convinced him that the name sounded more like ‘cadaver’ (corpse). Hence, the name was dropped. Bezos then thought of naming the company ‘Relentless’. Finally, he decided on Amazon after the largest river in the world. By the way, if you type www.relentless.com, guess where you will land!

Initially, Amazon’s sales were limited to word-of-mouth publicity only. In fact, for the first few orders, Bezos and his employees used to drive down to the post offices to deliver the packages themselves.

Bezos reincorporated the company in Delaware. Its customer base grew to around 1.8 lakh with annual revenues of around $16 million.

By 1997, the company’s annual revenues had seen a massive jump to $148 million. Amazon was still a private company. However, Bezos realized that he needed more funds to sustain the long-term trajectory and decided to go public. On May 15, 1997, Amazon issued an IPO at $18 per share under the symbol AMZN on the NASDAQ stock exchange. The IPO raised $54 million.

Just before the listing, Barnes & Noble sued Amazon alleging that Amazon’s claim of being the world’s largest bookstore was false since it was a book broker and not a bookstore. It was settled out of court and Amazon continued making the claim.

This year, Amazon also delivered its one-millionth order. This was a buyer in Japan who had purchased a Windows NT machine and the biography of Princess Diana. Jeff Bezos personally delivered this to the buyer.

After adjusting for a few stock splits, the stock finally closed at $1.96 on their first trading day.

In 1998, Amazon had included music and computer games to the list of products offered via its online store. The music section was launched with around 125,000 titles which were far more than what a brick and mortar music store offered. Also, people could listen to clips before buying and get recommendations based on their mood.

By 1999, Amazon had already expanded into selling video games, home-improvement items, consumer electronics software, games, and much more. Bezos wanted to catch up with his motto of “get big fast”. By the end of the year, Amazon had shipped to around 150 countries around the globe. It was shaping into a global online store.

The Times Magazine named Jeff Bezos Person of the Year in 1999.

Amazon peaked at this value by the end of 1999. It did survive the dot-com bubble but the stock price was not completely safe from the crash as it did fall a bit after that

In 2000, Amazon started permitting individual sellers and merchants to sell their products next to its own items. Further, there was a change in Amazon’s logo with the curved arrow featuring from A to Z. This was a representation of the fact that Amazon now carries all products from A to Z with a smile (the arrow curved like a smile). However, the company did not stat churning profits until late 2001. The beginning of the 21st century brought with itself the dot-com bubble. While it destroyed many e-commerce companies, Amazon grew past it and became one of the biggest names in online sales.

This was a major drop from the previous year’s high of over $106.

This was the lowest it had dropped to since the IPO.

By 2002 Amazon also started venturing into clothing. It announced a partnership with several clothing companies and started offering more than 400 brands online. It also introduced ‘Free Super Saver Shipping’ that allowed buyers to avail of free shipping for orders above $99.

In 2003, Amazon stepped foot outside retailing and launched Amazon Web Services (AWS). This eventually became an engine that generated huge profits for the company and supported its e-commerce expansion activities in the future. It also started leasing its platform to other eCommerce sites like target.com, borders.com, etc.

In 2004, Amazon made an entry into the Chinese market by buying Joyo – the largest online seller of electronics and books in China. However, Amazon China trailed far behind China’s giant retailer Alibaba.

This was the year that Jeff Bezos announced the launch of Amazon Prime – a loyalty program that was priced at $79 per year and included free two-day shipping on any order. This

In 2006, Amazon launched Fulfillment by Amazon (FBA) for its third-party sellers. Under this service, sellers were allowed to store their products at Amazon’s warehouses for a nominal fee. When a customer placed an order, Amazon would take the product from its warehouse and pack and ship it to the customer within the agreed time. It also handled returns and refunds with ease.

This is the year when Amazon unveils Kindle – an electronic reading device at $399. Users can download books, magazines, newspaper articles, etc. with ease using this device.

Amazon’s workforce was growing at a rapid pace with the growth of the company. In 2007, it made a deal with the City of Seattle and a developer to consolidate its workforce that was scattered all across the country, into a 1.6 million square feet headquarters in the city.

Merely two months after launching Kindle, Amazon acquired Audible – an audiobooks company for $300 million. Audible had a library of around 80,000 programs across the US and Europe.

In May 2009, Amazon launched its publishing line – Amazon Encore. It published titles that have gone out of print or self-published books with high sales potential. This year the company also bought Zappos – an online shoe retailer for around $900 million. This year also saw the launch of Amazon Basics that sold basic commodity-level items at a lower price than most companies selling them directly on their sites.

In 2010, Amazon acquired Quidsi, the parent company of Diapers.com for $554 million including stock and cash.

In February 2011, Amazon launched a streaming service like Netflix as a part of its Prime package. It also launched its tablet computer – Kindle Fire in November this year. It also introduces the concept of Amazon Lockers where buyers can pick-up their online purchases from without waiting for delivery.

As the business grew, Amazon had started looking for ways to improve the efficiency of its operations in a cost-efficient manner. Hence, the company bought Kiva Systems in 2012. This was a manufacturer of robots based out of Massachusetts. The warehouse robots helped Amazon deliver products faster and more efficiently without needing more manpower.

To boost its presence in Asia, Amazon launched a marketplace in India in 2013. On the technological front, it launched a Mayday button allowing users to get instant access to a live tech adviser via their devices. The company also purchased The Washington Post for $250 million. It also started delivering packages on Sundays from 2013.

In 2014, Amazon launched its first and only smartphone – Fire integrating its universe of media and streaming options in one device. However, the phone failed to make a mark and the company had to write down $170 million and cease production. It purchased the video game streaming company Twitch for $970 million. It launched Fire TV and Amazon Echo a voice-enabled speaker.

In 2015, the company announced the construction of four wind farms, launched Amazon Home Services and made its entry into the on-demand service economy, introduced the Dash Button – a single-click, Wi-Fi-enabled one or two-day delivery service, launched the Amazon Launchpad that helps startups to market and distribute their products, and opened its first brick and mortar store in Seattle.

In 2015, Amazon crossed Walmart as the world’s most valuable retailer.

Amazon teams up with Fiat Chrysler Automobiles to sell cars online in Italy. It also introduces a new concept called Amazon Flex where drivers can sign up with the company to deliver packages using their own cars.

This year, Amazon successfully completed its first drone delivery in the UK. Also, it captured half of all online sales growth in 2016.

In June 2017, Amazon acquired Whole Foods marking the entry of the company into the world of grocery and physical retail. It purchased all 471 stores of Whole Foods for a whopping $13.7 billion.

In 2017, Jeff Bezos was named the richest man in the world.

As Amazon continued boosting its revenues and profits, the investor sentiment stayed optimistic leading to a constant increase in its stock price. In 2018, Amazon’s market capitalization managed to cross the $1 trillion mark. This year, the company also announced an increase in the minimum wages of its employees to $15 an hour and chose New York’s Long Island City and Virginia’s Arlington to split the duties as the company’s second headquarters.

2019 market 25 years in business for Amazon. With Around 6.5 lakh employees, 288.4 million square feet of real estate, and accounting for nearly half of online retail sales in the US, Amazon looked set as the online retail and service provider of the future.

After some backlash from local politicians and community members in New York, Amazon cancels its plans for headquarters in Long Island City and settles on Northern Virginia. Also, amidst escalating US-China tensions, Amazon exits the China market this year.

While this year has been tough on economies and individuals around the globe due to the COVID-19 pandemic and subsequent lockdowns, the rise in online purchases and home deliveries as opposed to going to physical stores has seen Amazon cross the $1.5 trillion market capitalization mark. Also, its stock price crossed the $3,500 mark this year.

In 1997, Amazon had launched shares at $18 per share. Today, the price has crossed $3,500. So, if someone would have invested $10,000 in Amazon’s IPO, it would be worth around $19 million today (in 23 years). While Amazon did ride the digitization and globalization wave optimally, it also ensured that it stayed ahead of the race and kept innovating constantly. A global company and a great company to invest in, Amazon is truly a brand that resonates with success and growth.

Hope you found this interesting.