Budget 2020 Glossary : Key Terms To Know About The Budget 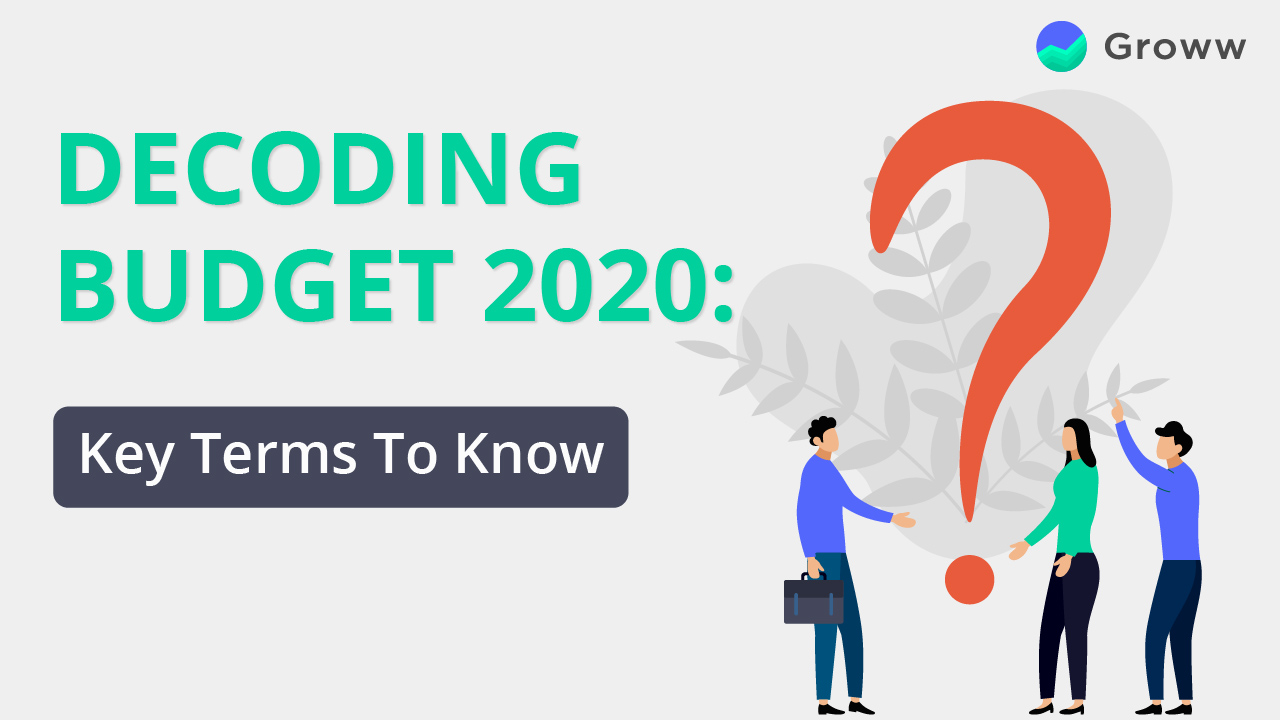 The first Union Budget of the decade will be  presented in the Lok Sabha by finance minister Nirmala Sitharaman. This also calls for brushing up and understanding a few terms related to the budget that will be frequently used throughout FM’s speech. Here is a glossary of commonly used terms when it comes to budget.

Union Budget actually lays down the statement of the estimated receipts and expenditure of the Govt. of India for the coming financial year.  It sets out exactly how the govt proposes to allocate the financial resources among the various agencies that make claim on it and how it proposes to raise the finances for this.

Union Budget is undoubtedly the most extensive account of the government’s finances, in which revenues from all sources and expenses of all activities undertaken are aggregated. It comprises the revenue budget and the capital budget.

GDP or Gross Domestic Product is the total market value of all the finished goods and services produced within a country in a specific period of time. This value performs as a comprehensive outlook of a country’s economic condition or its economic health. GDP can be calculated on an annual or on a quarterly basis.

The CSO or Central Statistical Office is responsible for calculating GDP. They accumulate data from both central government and state government-run agencies, and then they use the following methods for calculation.

Among these four methods, GDP at factor cost is the most commonly used figure. This number reveals how industries are performing. The expenditure-based model, on the other hand, sheds light on the different areas of the India’s economy and illustrates the trade and investment scenarios. The Government of India releases GDP numbers quarterly and the final number on May 31st. Currently, India’s GDP growth rate stands at 4.5%, according to the last quarterly update.

The government earns income by means of direct and indirect taxes paid by individuals and entities. A type of tax which is paid directly by an individual to the

Government is referred to as Direct Tax. Examples of direct tax include income tax and corporate tax. Indirect  tax is tax which is levied on goods and services and not paid by individuals directly. Indirect tax is levied at the same rate for everyone irrespective of the income bracket they belonged to. GST is an example of indirect tax.

“Goods” means every kind of movable property other than money and securities but includes the actionable claim, growing crops, grass and things attached to or forming part of the land which is agreed to be severed before supply or under a contract of supply.

These are levies charged when goods are imported into, or exported from, the country, and they are paid by the importer or exporter. Usually, these are also passed on to the consumer.

The difference between revenue expenditure and revenue receipt is known as revenue deficit. It shows the shortfall of government’s current receipts over current expenditure.

It is the government actions with respect to aggregate levels of revenue and spending. Fiscal policy is implemented through the budget and is the primary means by which the government can influence the economy.

This comprises actions taken by the central bank (i.e. RBI) to regulate the level of money or liquidity in the economy or change the interest rates.

A sustained increase in the general price level. The inflation rate is the percentage rate of change in the price level.

The Capital Budget consists of capital receipts and payments. It includes investments in shares, loans and advances granted by the central Government to State Governments, Government companies, corporations and other parties .

The Bill produced immediately after the presentation of the Union Budget detailing the Imposition, abolition, alteration or regulation of taxes proposed in the Budget.

The Vote on Account is a grant made in advance by the parliament, in respect of the estimated expenditure for a part of new financial year, pending the completion of procedure relating to the voting on the Demand for Grants and the passing of the Appropriation Act.

If the total expenditure under a Grant exceeds the provision allowed through its original Grant and Supplementary Grant, then, the excess requires regularization by obtaining the Excess Grant from the Parliament under Article 115 of the Constitution of India. It will have to go through the whole process as in the case of the Annual Budget, i.e. through the presentation of Demands for Grants and passing of Appropriation Bills.

Amount of money allocated in the Budget to any ministry or scheme for the coming financial year.

From the fiscal year 2006-07, every Ministry presents a preliminary Outcome Budget to the Ministry of Finance, which is responsible for compiling them. The Outcome Budget is a progress card on what various Ministries and Departments have done with the outlays in the previous annual budget. It measures the development outcomes of all Government programs and whether the money has been spent for the purpose it was sanctioned including the outcome of the fund usage.

Parliament, unfortunately, has very limited time for scrutinising the expenditure demands of all the Ministries. So, once the prescribed period for the discussion on Demands for Grants is over, the Speaker of Lok Sabha puts all the outstanding Demands for Grants, Whether discussed or not, to the vote of the House. This process is popularly known as ‘Guillotine’.

Motions for reduction to various Demands for Grants are made in the Form of Cut Motions seeking to reduce the sums sought by Government on grounds of economy or difference of opinion on matters of policy or just in order to voice a grievance.

All revenues raised by the Government, money borrowed and receipts from loans given by the Government ?ow into it. All Government expenditure other than certain exceptional items met from Contingency Fund and Public Account are made from this account. No money can be appropriated from the Fund except in accordance with the law.

A fund placed at the disposal of the President to enable him/her to make advances to the executive/Government to meet urgent unforeseen expenditure.

Under provisions of Article 266(1) of the Constitution of India, Public Account is used in relation to all the fund flows where Government is acting as a banker. Examples include Provident Funds and Small Savings. This money does not belong to the government but is to be returned to the depositors. The expenditure from this fund need not be approved by the Parliament.

This is the tax paid by corporations or firms on the incomes they earn.

The Minimum Alternative Tax is a minimum tax that a company must pay, even if it is under zero tax limits.

Hope these terms are now clear to you and will help you follow up with the budget in a better way.